These photos show an Indonesian ferry accident in July 2018

The photos were published in this Facebook post on October 3, 2019. It has been shared more than 1,000 times. 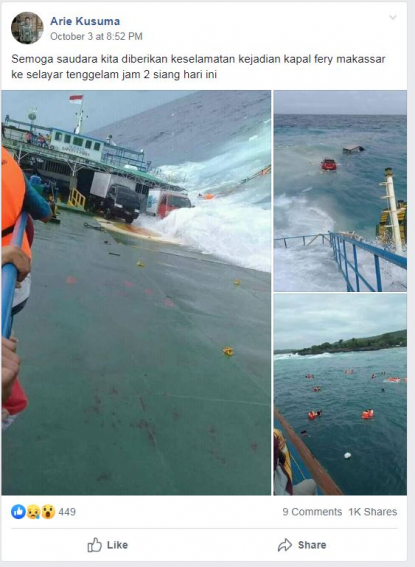 The post’s Indonesian-language caption translates to English as: “May our brothers and sisters are safe, an accident of a ferry from Makassar to Selayar that sank at 2 pm today.”

Makassar is the capital city of the Indonesian province of Sulawesi, while Selayar refers to both an island and a regency in the province.

The same photos were also shared in this post with the same claim.

The claim is misleading; the photos show a ferry accident that happened in July 2018.

Reverse image searches on Google using the three photos show they were all taken in July 2018.

Two of the photos were handout pictures from the Indonesian Disaster Mitigation Agency dated July 3, 2018. They were published on AFP’s website here and here.

Below is a screenshot of the two photos:

The caption states: “This handout picture taken and released on July 3, 2018 by Indonesia’s Badan Nasional Penanggulangan Bencana (BNPB), the accident mitigation agency, shows passengers clinging to the side of a ferry as it sank off the coast of Selayar island, in South Sulawesi province. Six people died on July 3 after a ferry sank off the coast of Indonesia, as rescuers raced to save more than 130 other passengers aboard the downed vessel, officials said. The deadly accident comes as Indonesia on July 3 officially called off a search for some 164 people still missing after another ferry sank on a lake in Sumatra two weeks ago.”

Below is a comparison between the photos in the misleading posts (top) and the photos from the Indonesian Disaster Mitigation Agency (bottom): 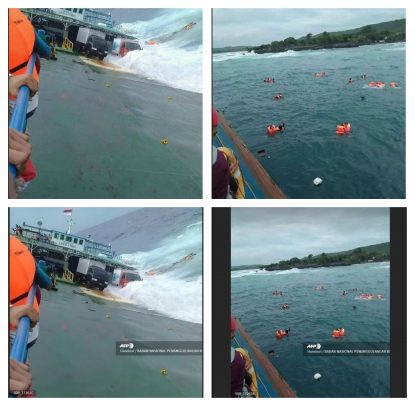 The third photo was also taken of the same accident in July 2018. It was published by Tempo in this July 3, 2018, report about the capsized boat.

Below is a screenshot of the Tempo report: 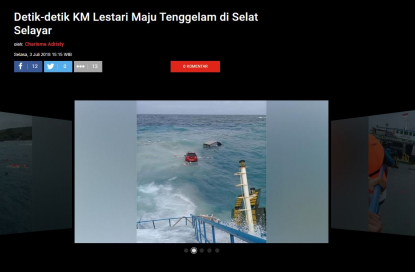 Screenshot of the Tempo report

Below is a screenshot comparison of the third image in the misleading posts (L) and the photo published by Tempo (R):

According to this CNN Indonesia report on July 3, 2018, MV Lestari Maju capsized on that day while “sailing from the Bira pier, Bulukumba regency, to Pamatata pier, Selayar regency”.

Here are the locations of the two piers on Google Maps.

No, these photos show storm clouds in the US and a typhoon that hit Japan in 2018