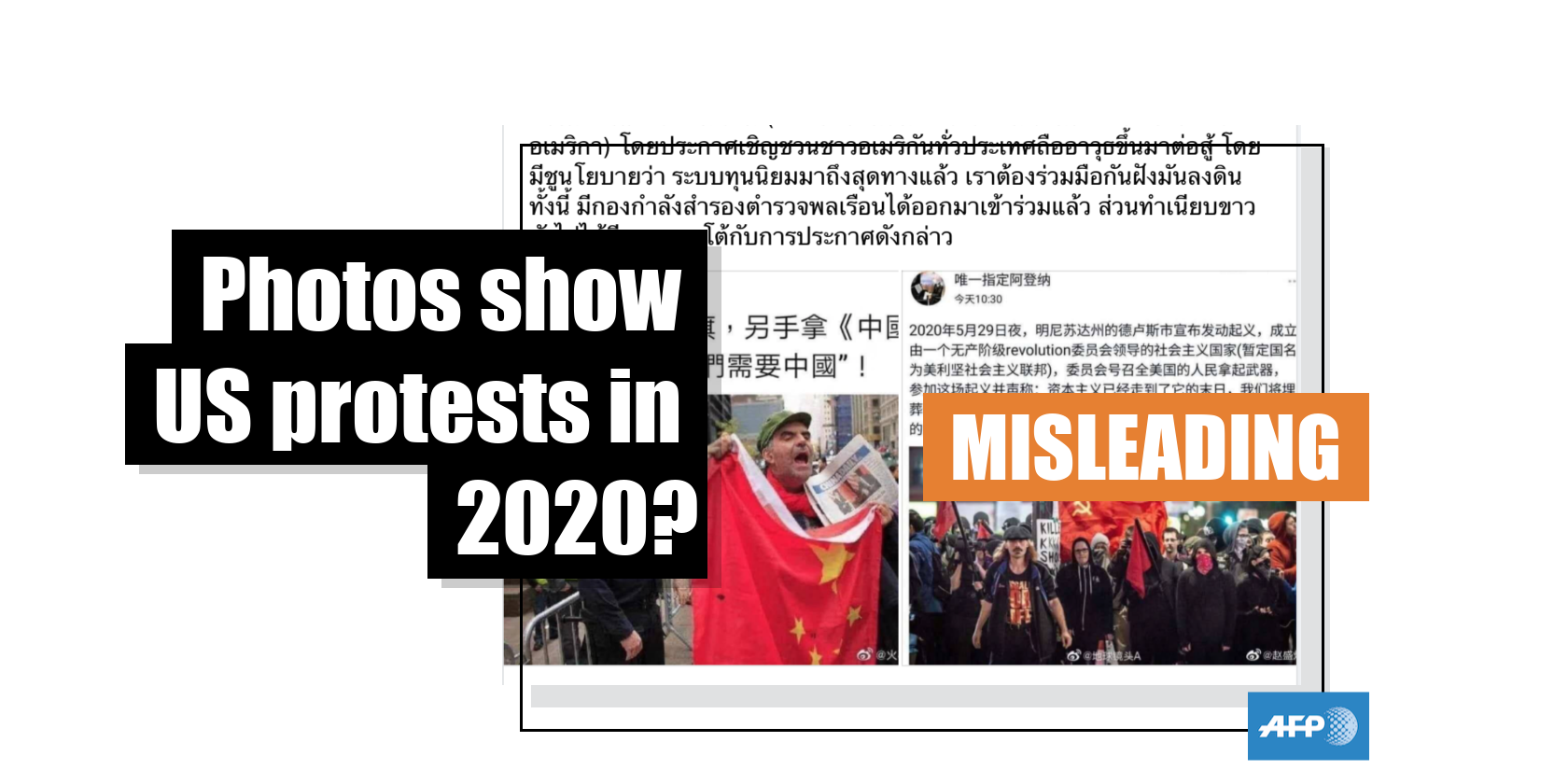 Two photos have been shared hundreds of times in multiple Facebook posts published in May 2020 alongside a claim they show protests in the US. The claim is misleading; the photos have circulated online since 2011 and 2018 respectively in reports about a 2011 Occupy Wall Street protest in New York City and a rally organised by the far-left group Antifa in the US state of Oregon in 2018.

The first photo shows a man holding a Chinese flag as a police officer looks on from a barricade; the second photo shows a group of black-clad protesters standing in front of a flag of the former Soviet Union. 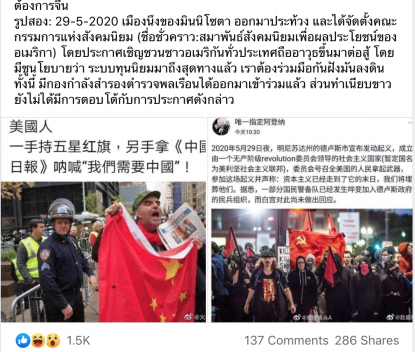 The post’s Thai-language caption translates to English as: “The US will never be the same. / First photo, American person holds a Chinese flag with a Chinese newspaper on his hand shouting that “we want China”. / Second photo, 29-5-2020 in one town of Minnesota, they came out to protest and have established a Socialism Committee (Socialism Confederation of the United States) while announcing American people to carry weapons, fight and join the uprising. The main objective is to stress that capitalism has come to an end, we need to abolish it, there have been police and soldiers that have helped and participated but the White House hasn’t responded yet.”

The post was published after violent protests broke out across the US following the death of George Floyd, a black man who died in police custody, as reported in this AFP article published on June 2, 2020.

The photos were also shared here, here, here and here with a similar claim in Thai; as well as here in Chinese and here in English.

A reverse Google image search for the first photo found it was published in this November 2011 report about the 2011 Occupy Wall Street protests by chinaSMACK, a US-based blog on China events.

It reads, in part: “November 15th morning local time, New York police forcefully cleared out “Occupy Wall Street” demonstrators. Clashes occurred between police and demonstrators in a scene of chaos with many people being arrested. At present, it is not clear whether or not there have been any injuries and casualties.”

Below is a screenshot comparison of the first photo in the misleading Facebook post (L) and the chinaSMACK photo (R):

Occupy Wall Street is a protest against wealth inequality that began at Zuccotti Park in New York’s Wall Street financial district on September 17, 2011. Protesters occupied the park for several months before being forced out by the police in mid-November.

Another reverse Google image search for the second photo found it was published here on the website for ABC St. Louis, a local television station in the US state of Missouri.

The October 14, 2018 report is titled: “Chaos Spreads In Portland, Mayor Defends Not Intervening In Violence”. 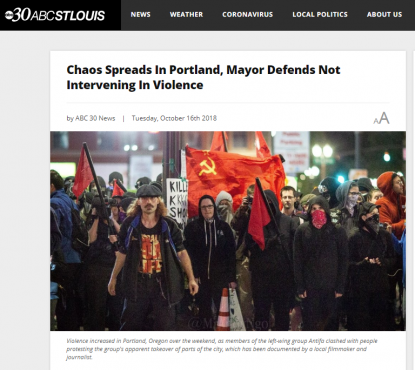 A screenshot of the 2018 ABC St. Louis report

The article's first paragraph reads: “Violence increased in Portland, Oregon over the weekend, as members of the left-wing group Antifa clashed with people protesting the group's apparent takeover of parts of the city, which has been documented by a local filmmaker and journalist.”

The violence involving "Antifa" activist groups in Portland, Oregon was also reported by other local media, including the television channel CBS here and Fox News here.