Images of Hindu idols have been shared in Facebook posts that claim the statues were destroyed after the gods failed to protect India from Covid-19. This claim is false: the images predate the Covid-19 pandemic; they have previously circulated in online posts about unrelated Hindu festivals.

“Thousands of idols were destroyed and thrown away in India because they could not answer the people’s prayers,” reads the Tagalog-language caption accompanying four images posted here on Facebook.

“Indians throw thousands of idols on the street for not protecting them against the virus,” states the text overlay on one of the images. 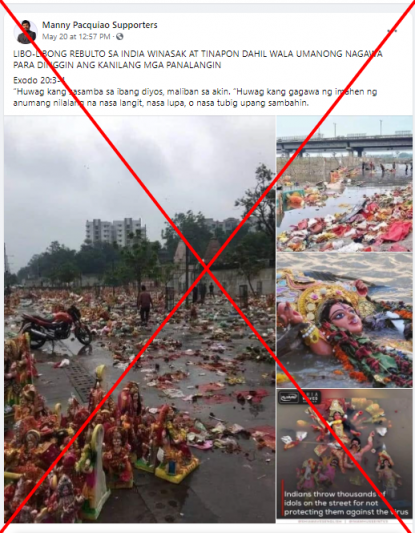 The post circulated online in May 2021 as India faced a devastating surge in Covid-19 infections blamed on new virus variants and the government having allowed mass gatherings, AFP reported.

Daily infections reported across the country have since dropped in June.

The same images have also been shared alongside a similar claim here, here, here and here on Facebook.

Combined reverse image and keyword searches found the images predate the coronavirus pandemic and have appeared in unrelated reports about Hindu festivals since 2017.

India confirmed its first Covid-19 case on January 30, 2020, according to this research article.

The first image is from a tweet posted on August 11, 2019 by Vijay Nehra, a former municipal commissioner of the Ahmedabad District in Gujarat, India.

Nehra tweeted: “Ordinary citizens have decided to keep #Sabarmati river clean. Instead of immersing Dashama idols in the river, they have respectfully left them on the banks!! Thousands and Thousands of them.”

The second image was embedded in this report published on August 13, 2019 by the local news organisation New Indian Express.

The report is about a Hindu festival in 2019 and reads in part: "KT Rama Rao on Monday took to Twitter to share an idea from Ahmedabad that people in Hyderabad can emulate to protect lakes from pollution due to the immersion of Ganesh idols."

The third image is featured in this October 3, 2019 report by the India Times newspaper.

The report reads in part: “Immersion of idols and puja materials including flowers in rivers has been an integral part of various Hindu festivals for ages".

“But during the upcoming festival season, the Central Government has banned immersion of idols in the Hindu holy river of Ganga and its tributaries.”

The fourth image was taken by an AFP photographer in September 2017 and can be viewed on AFP Forum here.

Its caption reads: “An idol of Hindu goddess Durga floats in the Brahmaputra river after immersion during the Dusshera Festival in Guwahati on September 30, 2017, on the final day of Durga Puja."

“Durga Puja, the annual Hindu festival that involves worship of the goddess Durga who symbolizes power and the triumph of good over evil in Hindu mythology, culminates in the immersion of idols in bodies of water."

Below are a set of screenshot comparisons that show the images in the misleading posts (L) and their corresponding source photos (R): 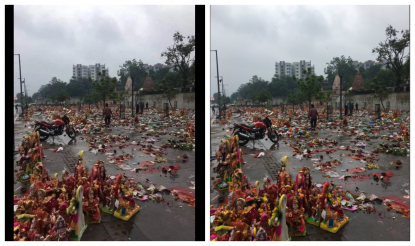