Two images of dilapidated roads have been shared in multiple Facebook posts alongside a claim they were captured in Sri Lanka. The claim is misleading; one of the images has circulated since at least December 2019 in Malaysia-based social media posts; the other image has circulated since 2016 in reports about a road in Bangladesh. 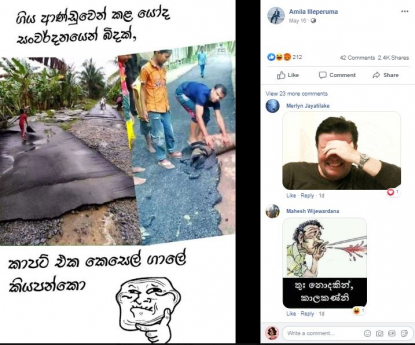 The Sinhala-language text superimposed on the image reads: “A bit of the mega development carried out by the previous government, the asphalt is in the banana tree grove”.

The photos were also shared alongside a similar claim on Facebook here and here.

A reverse Google image search for the photo on the left of the post found the image was published in December 2019 on Malaysia-based Facebook pages here and here. 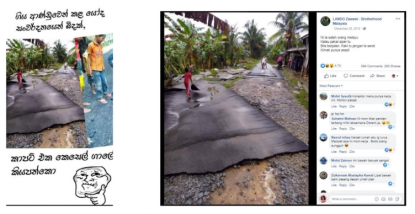 The photo on the right in the misleading post has circulated since at least 2016 in reports about a damaged road in Bangladesh and has been featured in social media posts that were previously debunked by AFP.

This video actually shows frogs for sale in Thailand