A photo of a queue of buses in India has been shared thousands of times on Facebook and Twitter alongside a claim they were organised by a leading opposition politician to transport migrant workers who were left stranded after a nationwide coronavirus lockdown. The claim is false; the photo has circulated in reports since February 2019 about a Hindu festival. 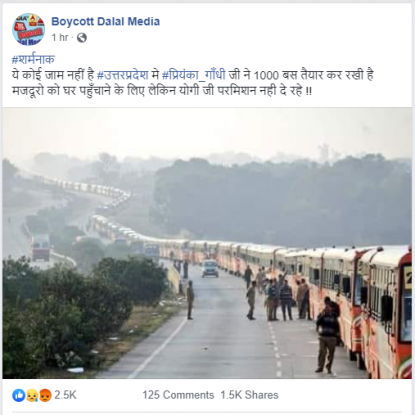 The post’s Hindi caption translates as: “Shameful! This is not a traffic jam. Priyanka Gandhi has arranged 1000 buses to take labourers to their homes but Yogiji is not giving permission !!”

Yogiji refers to Yogi Adityanath, the chief minister of the northern Indian state of Uttar Pradesh and a leading figure in India’s ruling Bharatiya Janata Party.

In late May 2020, Gandhi was eventually forced to recall hundreds of buses that her party had sent to Uttar Pradesh to provide transport for stranded migrant workers after they were blocked at the border. The development was reported here by Indian television channel NDTV and here by Indian newspaper the Hindustan Times on May 20.

A reverse Google image search found that the photo was published by ANI, an Indian news agency, on Twitter here on February 28, 2019, more than one year before Gandhi’s attempt to transport migrants.

ANI reported that the photo shows a queue of over 500 buses in Uttar Pradesh that was organised during Kumbh Mela, a major Hindu festival, and that set a world record for the longest fleet of buses.

Prayagraj: Uttar Pradesh State Road Transport Corporation (UPSRTC) attempts Guinness Book of World Records for the longest fleet of 500 buses. The buses with the Kumbh logo will cover a stretch of 3.2 km in the district. #Kumbh2019 pic.twitter.com/zLpCJeeOsO

The photo was also published with credit to ANI in several other Indian media reports on February 28, 2019, for example here by Financial Express and here by NDTV.

Uttar Pradesh’s world record for the “largest parade of buses” is recognised by the Guinness World Records here.

The INC also refuted the claim about the photo.

“This is true that we have sought permission from the state government to run a thousand buses, but this photo has nothing to do with our efforts to arrange buses for migrant workers,” Mohit Pandey, the INC’s head of social media in Uttar Pradesh, told AFP by phone on May 19, 2020.