Two pictures, one of a plane crash and the other of soldiers walking on a dusty road, have been making rounds on Facebook with claims that they show the escalating conflict between separatists and the army in Ethiopia’s northern Tigray region.  But the claims are false. AFP Fact Check found that one picture was of a plane crash in Sudan while the other shows Ethiopian soldiers in 2000 which the photographer confirmed are not related to Tigray.

Tigray has seen a rise in tensions since the 2018 arrival of Prime Minister Abiy Ahmed. Local opposition leaders accuse his government of discriminating against them.

The feud escalated after Abiy ordered a military operation in the restive region in response to an alleged attack on a federal army camp by the local ruling party, the Tigray People's Liberation Front (TPLF), on November 3, 2020.  The TPLF denies the attack occured.

“Intial Pictures emerging from the battlefield in Tigray region (sic),” reads the caption of a post shared dozens of times since its publication on Facebook on November 4, 2020.

While one image appears to show the aftermath of a military plane crash, the other features men in military fatigues walking along a dusty road. 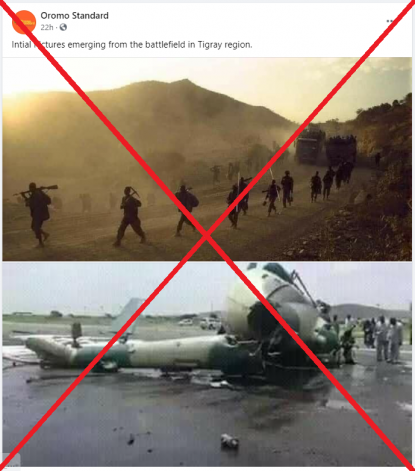 Screenshot of the misleading claim on Facebook, taken on November 5, 2020

However, these claims are false. AFP Fact Check traced both the images to unrelated events.

In the background of one of the pictures,  you can see two trucks seemingly packed with soldiers.

AFP Fact Check ran an image reverse search that revealed the picture has been online since December 4, 2009.

Screenshot of the search result on TinEye, taken on November 5, 2020

The first link takes you to the PhotoShelter website -- a platform that sells photo archives -- where they provide more information on the picture.

The image was taken by Petterik Wiggers, who has been working as a photographer and cameraman in Africa for more than 20 years and is currently based in Addis Ababa.

According to the caption, the image was taken in Ethiopia in 2000 and shows troops involved in the long-running border conflict with neighbouring Eritrea.

Contacted by AFP Fact Check, Wiggers confirmed the image was taken during the Ethiopian-Eritrean conflict and that it had “nothing to do with what is going on in Tigray right now”.

The picture was also used in this article published on Ethiopia Insight, an independent Ethiopian news website, on September 28, 2019, discussing the possibility of Tigray branching off from Ethiopia into an independent state.

Wiggers took another photo of the same scene, which is hosted on the Panos photo agency website. It shows a closer shot of the trucks loaded with soldiers.

Picture of a plane crash

Another image used in the misleading Facebook post shows a plane crash scene. AFP Fact Check found that the picture has been circulating online at least since January 2020.

Several media reports including this one from major Middle Eastern news channel Al Arabiya have used the photo to illustrate a military transport plane crash which took place in Sudan on January 3, 2020.

As reported by AFP, the incident happened shortly after the plane took off from a military base in West Darfur, killing the 18 passengers onboard including four children.

The AFP story was published on the MSN website, which used the image to illustrate the story.

According to the image credit, the picture was provided by Khaleej Times, an English news website based in Dubai.

AFP Fact Check contacted Khaleej Times for more details on the image and we will update this fact check once we’ve received an answer.

The image was also used in this article here about the crash in Sudan.

On November 4, 2020, Prime Minister Abiy accused the Tigray People’s Liberation Front (TPLF) of attacking a military camp and announced that he had ordered a military operation in the region.

The Ethiopian National Defense Forces, under the direction of a Command Post, have been ordered to carry out their mission. #PMOEthiopia pic.twitter.com/ouemhZO5u3

The government has also declared a six-month state of emergency in Tigray where internet and phone connections have been shut down.

According to internet access monitoring site NetBlock, the network in the region stopped working at 1am on November 4, 2020 shortly after the attack, confirming reports from authorities.