Thermometer guns are safe to use, health experts say

A video has been viewed thousands of times on Facebook and YouTube alongside a claim that thermometer guns cause “damage” to the brain because they contain infrared radiation. The claim is false; experts say infrared radiation in the guns does not harm the brain; health agencies worldwide encourage using thermometer guns to manage the spread of COVID-19, the disease caused by the novel coronavirus.

The one-minute clip shows two men discussing the use of thermometer guns and the purported harmful effects it can have on the brain.

The Indonesian-language post translates to English as: “Viral "THERMO GUN LASER RADIATION IS DANGEROUS FOR THE BRAIN". 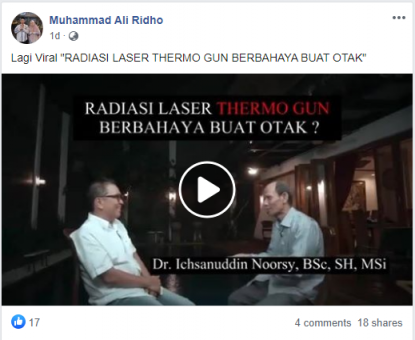 A combined reverse image and keyword search found a longer version of the video published here on YouTube on July 13, 2020. 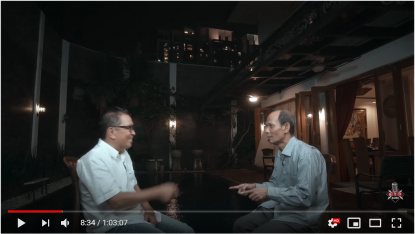 The video’s Indonesian-language title translates to English as: “Chatting with Ichsanuddin Noorsy is the Most Nutritious Apart From Chatting with Bossman Sontoloyo”.

Ichsanuddin Noorsy, seated on the right in the video, is an economist and political analyst in Indonesia.

"If you want to examine my head, check here," Ichsanuddin said while pointing the back of his hand.

"Why? Because thermometer hand gun is for checking hot wires. The laser is used to check hot wires, not for checking human temperatures and we're willing to accept it and they sell it at high prices. Try to imagine how they sell the device, then we are fooled, our heads are shot with lasers, we don't know impact of damage to the brain structure."

The clip in the misleading posts matches the YouTube video from the eight-minute 33-second mark.

“Scientifically, various experts have said that this statement is incorrect because the thermal gun only measures [temperature] with infrared radiation that is reflected at all times by all objects around us. It does not use laser light, radioactive beams such as x-ray, only infrared,” he said.

“Various references say this brain-damaging reference is a false statement and this will endanger everyone and is counterproductive to prevent transmission from occurring.”

The US Food and Drug Administration states here that thermometer guns “may reduce the risk of spreading disease between people being evaluated”. It does not suggest thermometers can harm the brain.

Hong Kong’s Department of Health notes that infrared forehead thermometers “should only be used for screening instead of diagnostic purposes due to greater measurement error.”