The image shows scores of black men in single file, shackled to each other by the neck. A text has been edited onto the image captioning the picture “Black Friday 1904”. A Facebook page with over 100,000 followers shared the image on November 23, 2018, with a similar caption. 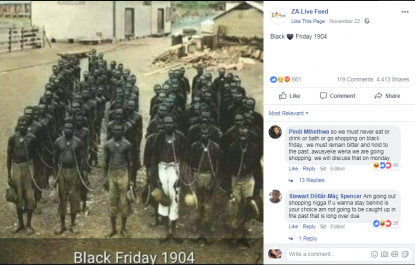 Google Reverse Image search results show the picture is linked to a book cover for Chris Owen’s Every Mother's Son is Guilty.

Owen told AFP the image is of Aboriginal prisoners in the Town of Wyndham, Western Australia. He provides a detailed description of the book cover in the introduction of his book and states that when he found the photo in the State Library of Victoria (Melbourne) he had to get permission from the traditional owners to use it.

“The photo which is a ‘lantern slide’ has subsequently been colourised (and reversed). It was originally published on 18 February 1905, p.24 in the weekly Western Australian newspaper, Western Mail. The men were imprisoned (for 2/3 years) for alleged cattle killing,“ said Owen. 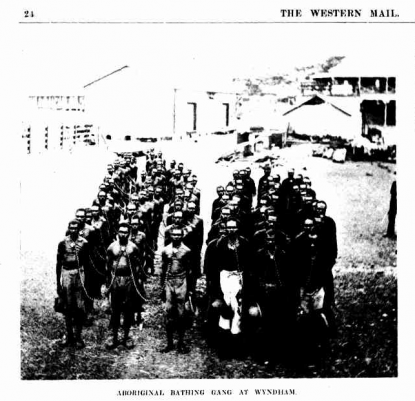 a screenshot of the Western Mail lantern slide, originally published in 1905

Owen said he had found no reference to the term “Black Friday” when sourcing the photo or researching the image.

“I make no mention of Black Friday anywhere and have never seen it related to Aboriginal people. I do however talk extensively about Blackbirding which was the name they gave for men who would kidnap Aboriginal men and use them to dive for pearl shell. This was slavery.”

The author and historian says his understanding of Black Friday relates to American Thanksgiving traditions and retail capitalism. In the Australian context, “it relates to some infamous Bushfires in 1939 (and later bushfires) that killed a lot of people.”

The author said the Black Friday link to African slavery appeared to be an ‘urban myth’ as the term came about long after slavery had been abolished.

The Australian Holocaust, an activist group, posted the picture in April 2016 (later crediting the book), and it has since been shared 57,652 times with 3,285 comments.

“Basically Black Friday was an attempt by Americans, after Thanksgiving, to shore up their profits just after the public holiday, put them ‘in the black’ instead of ‘being in the red’ so it relates to their bank accounts rather than to anything else.”

Grundlingh said the photograph “tells us more about public attitudes and misconceptions than anything in the real world.”

Another theory for the origin of the term is found by Snopes, dating as far back as 1951, to describe the day after Thanksgiving, a day apparently known for “worker absenteeism”.

Many US employees had the day off, and retailers wanted to kick-start the holiday spending season by tempting them into the shops. This advert supplied by the American Dialect Society suggests the name Black Friday was invented by police in Philadelphia in 1966 to disencourage huge crowds -- without success.