No, this video does not show football fans in Indonesia chanting the name of President Joko Widodo

A Facebook post shares a video it claims shows a crowd at a football match chanting the name of Indonesian President Joko Widodo, who will run for re-election in 2019. The people in the crowd are actually calling out the name of his sole challenger in the presidential race, Prabowo Subianto.

The 26-second video, posted to Facebook group SUARA MAYORITAS (Voice of the majority) on November 29, 2018, has a caption that claims the crowd is voicing support for “Jokowi”, which is the president’s nickname, at a match in Liga 1, Indonesia’s premier football competition.

The caption, when translated to English, says: 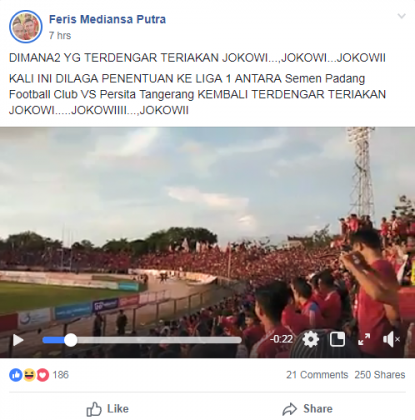 Snapshot of the misleading video.

But in the video, which was shared hundreds of times within a few hours of it being posted, the crowd can clearly be heard chanting Subianto’s first name.

After “Prabowo” is chanted several times, a man can also be heard saying: “Replace the president”.

AFP has not posted the video so as not to drive traffic to the misleading post. But it can be traced back by clicking on its archived link.

Semen Padang, one of the teams playing in the match featured in the post, is from the province of West Sumatra.

An Indonesian news group sumbarpost.com, which reports news related to West Sumatra, published an article on November 28, 2018, about Semen Padang fans chanting Subianto’s name in the match, pitting their club against Persita. Here is that article.