Multiple posts on Facebook and Twitter shared newspaper reports claiming that students and staff abducted from a secondary school in Nigeria were released on February 19, 2021. This is false; the governor of the state where the group was taken from confirmed on the same day that authorities had not yet secured the children’s release.

The Nigeria Tribune newspaper reported that the boys had been released into the care of a religious leader who had visited the state to help with their rescue. 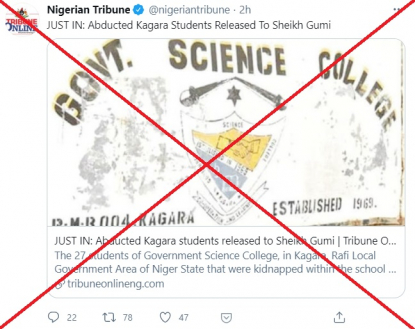 Gunmen in military uniforms raided the Government Science College in Kagara in Niger State on February 17, 2021, killing one student and taking others into a nearby forest.

As AFP reported, the kidnappers snatched 42 people, including 27 students, three teachers and other relatives of the school staff.

The incident came just two months after 300 students were kidnapped from a school in Kankara in nearby Katsina, the home state of President Muhammadu Buhari who was visiting the region at the time.

Shortly after the Tribune posted its story, Niger governor Abubakar Bello dismissed the reports as “rumours” and said none of the kidnapped victims had been released by February 19, 2021.

Speaking at about 11:40 am Nigerian time, Bello said that as of “this moment, we do not have any additional information to give. I want to assure you that we are doing everything we can to ensure that we recover the victims safely. Our utmost priority is to make sure we bring them back home safe.”

Bello added that he had spoken with Gumi — the religious leader reported to have received the children — who confirmed to him that the story was not true.

“He also offered to assist, and at this point, whoever has anything to help with, we are ready to listen,” Bello said. “What we have agreed is that he is going to send me a comprehensive memo of his findings and suggestions on what he thinks we should do.”

Social media posts citing the Tribune can be found here and here. A number of other posts (here, here, and here) repeated the false claims on Facebook with no attribution to the newspaper or any other sources.