This story was originally published on a satirical website

A claim that an overworked employee at a funeral home in New York City was accidentally cremated while taking a nap during the COVID-19 crisis has been shared repeatedly on blog sites, Facebook and Twitter. The claim is false; the claim originated from a satirical website; as of April 28, 2020, there were no credible reports that the story was based on a genuine incident; the photo used in some of the misleading social media and blog posts was taken from an unrelated media report.

The claim was published here on a Malay-language blog site. Screenshot of the misleading report

The first three paragraphs of the article translate to English as: “A service worker at New York, Funeral & Cremation died yesterday, accidentally burned by one of his colleagues.

“According to police officials, Michael Jones, 48, decided to sleep after being exhausted working for sixteen hours straight because of too many dead bodies to handle.

“When he was asleep, another worker thought he was a body of a 52-year-old who died due to respiratory issues and moved him to the crematory.”

The claim is false; the story originated on a satirical website.

The same story was published in this April 11, 2020, article on the US-based satire website the Weekly Inquirer. The report is headlined: “NEW YORK, NY: EXHAUSTED FUNERAL HOME EMPLOYEE CREMATED BY MISTAKE WHILE TAKING A NAP.”

At the bottom of the webpage, a notice reads: “Disclaimer: This is satire.”

As of April 28, 2020, there have been no credible media or police reports detailing any accidental cremations in New York City during the COVID-19 crisis.

The same story has also been published elsewhere in articles that claim the same incident occurred in different US states.

The Weekly Inquirer published a similar satirical article here claiming an accidental cremation occured in Louisiana. In February 2020, the claim was published in the same format under different URLs in articles that purported to report the same incident in Texas and Missouri. The story was even published in March 2017 here on a different satirical website.

The photo at the top of the satirical report, which shows people in hazmat suits removing a body, was taken from this Bloomberg article published on April 10, 2020. The image is credited to Bloomberg and Angus Mordant, a New York-based photographer.

The photo’s caption in the Bloomberg report reads: “Medical workers move the body of a deceased patient to a refrigerated overflow morgue outside a medical center in Brooklyn, New York on April 3.”

Below is a screenshot comparison of the Weekly Inquirer article (L) and the Bloomberg article (R): 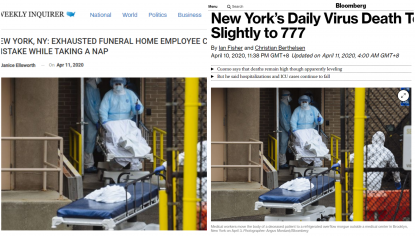 Snopes, a US-based fact-checking organization, also debunked the claims in 2017 here and in 2020 here.