The story originated from a parody account; no driver is threatening to spread COVID-19 across Nigeria

Multiple posts shared thousands of times on Facebook, Twitter and WhatsApp claim that a Nigerian taximan who picked up an Italian visitor infected with the novel coronavirus, in turn, contracted the disease and went on the run, demanding N100 million ($275,000) from the government. This is false; the story originated from a parody account and has been denied by the man pictured in the claim and government officials. The actual driver has reportedly been quarantined.

On February 25, a 44-year-old Italian man flew from Italy to Lagos, Nigeria. He slept at a hotel in Lagos and travelled to Ewekoro in neighbouring Ogun state, where he met staff from cement manufacturing company Lafarge Africa Plc.

After falling ill, he was tested for coronavirus based on his travel history. He tested positive, and became the first confirmed novel coronavirus case in Nigeria, fuelling false reports.

Less than 24 hours after Nigerian authorities announced the case,  Facebook page AIT Nigeria News claimed that the Italian man's taxi driver had also contracted the virus and was at large, threatening to spread it across the country if his family was not paid N100 million ($275,000).

The post, archived here, has been shared more than 2,700 times alongside what was said to be a picture of the driver in question. 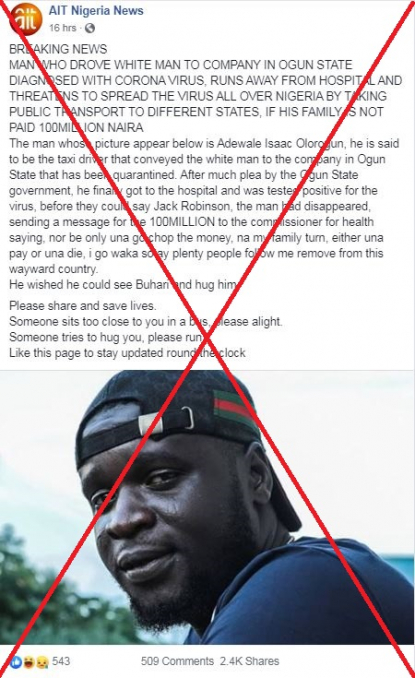 A screenshot taken on March 2, 2020, showing a Facebook post claiming this man has contracted coronavirus and is planning to spread the virus across Nigeria

The page is a parody

African Independent Television (AIT), owned by DAAR Communications, is one of the most popular TV stations in Nigeria. It has sparked Facebook parody pages, including this one with the name “AIT Nigeria News”.

After the post went up, Johnson Onime, spokesperson of DAAR Communications Plc released a statement, branding it  “fake news”.

He added that the network’s official Facebook page is “OfficialAITlive”.

Who is the man in the picture?

AFP traced the image in the post to a December 2018 report by BuzzFeed News about modern-day slavery in Libya. The man in the picture is Jude Ikuenobe, who was sold into slavery in Libya, after leaving his hometown in southern Nigeria for a better life in Europe.

Ikuenobe, who made it back from Libya to Benin, also released a video, saying he had not been in Lagos for two years and was not the Italian man's cab driver.

Officials say the actual driver has been quarantined

Segun Soyoye, industrial director of Lafarge Africa Plc, said all the 39 people who had contact with the Italian patient have been quarantined, including the driver who drove him to Ewekoro from Lagos.

Nigeria's Minister of Health Osagie Enahire confirmed this in a press conference in the nation’s capital Abuja on March 2, 2020.

He said authorities were still trying to trace all 156 passengers on the aircraft which brought him to Nigeria.