A video that has been viewed tens of thousands of times on YouTube and shared in multiple Facebook and blog posts claims that state auditors found Philippine Vice President Leni Robredo “could not explain” millions in government funds and would file charges against her. The claim is misleading; Robredo gave an explanation that was accepted by state auditors; the audit documents don’t mention anything about filing charges against Robredo or her office. 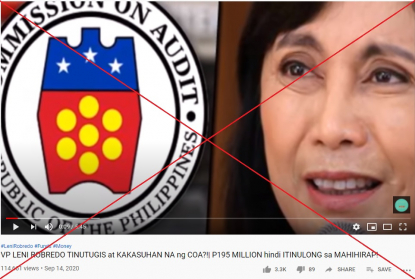 The five-minute, 45-second video is titled: “VP LENI ROBREDO HUNTED DOWN AND TO BE CHARGED by COA?!| P195 MILLION not USED TO HELP THE POOR!”

“COA” is the acronym for the Philippine Commission on Audit.

At the video's 0:35 mark, a voiceover could be heard saying: “The Commission on Audit hit the Office of the Vice President after it found that some funds from the said office have not been distributed to intended beneficiaries. The Commission on Audit found this move by the office of Vice President Leni Robredo, who could not explain why it couldn't release the funds to Filipinos, questionable.”

And from the 1:29 mark, the video shows screenshots of the headline and the first six paragraphs of this report, published September 6, 2020, by the Philippine Daily Inquirer, an English-language daily.

“OVP” refers to the Office of the Vice President.

The first three paragraphs of the report shown on the screen read: “Despite having the highest audit rating in government the Office of the Vice President (OVP) was still flagged by the Commission on Audit (COA) for its slow use of medical assistance program funds which could have aided more people.

“According to COA’s audit report of the OVP for 2019 dated Friday, the office still has yet to utilize its P122.8 million pending medical assistance program (MAP) funds for 2019 — now totaling at P195 million — which could have facilitated financial aid for hospitalized indigents all over the country.

“As a result, lesser patients were given assistance. COA said this goes against Presidential Decree 1445 or the Auditing Code of the Philippines, which mandates the efficient management of funds.”

The same video was also shared alongside a similar claim in blog posts here and here and on Facebook here, here and here.

But the claim is misleading; the video leaves out parts of the Inquirer report that mention Robredo’s explanation, which has been accepted by the COA; both the news report and the actual audit documents do not mention anything about filing charges against her office.

The Inquirer report cited in the video reads: “The OVP and Vice President Leni Robredo noted that the delays in the disbursement of funds were not due to any corruption-related issue, but more on an issue of prudence as they were not allowed to make expenditures for their programs due to 2019 being an election year ...

“In her radio program on Sunday, Robredo also clarified the issues, adding that COA just recommended ways for OVP to make expenditures and programs more efficient.”

The report adds: “The 2019 elections being an issue was confirmed by COA in the same report, citing that OVP failed to get an exemption from the Commission on Elections on expenditures.

“Still, COA advised OVP to smoothen processes to facilitate a quicker transfer of MAP funds, to which the latter adhered by doing a shift from giving out cash-based grants to just guarantee letters.

Moreover, the actual audit documents do not indicate charges would be filed against Robredo’s office. Instead, they recommend the office re-evaluate and streamline its funds release guidelines.

Below is a screenshot showing a portion of the audit observations and recommendations: 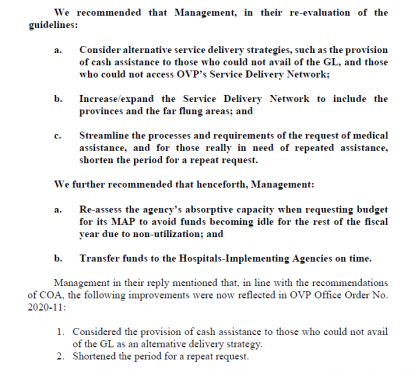 The same audit documents also commend Robredo’s office, saying: “The Auditor rendered an unqualified opinion on the fairness of the presentation of the financial statements of OVP as at December 31, 2019.”

It was the highest audit rating given to the OVP in two straight years, reported Philippine media, such as the Inquirer here and Rappler.com here, on September 6, 2020.