Skip to main content
Migrant workers and their family members lineup outside the Anand Vihar bus terminal to leave for their villages during a government-imposed nationwide lockdown as a preventive measure against the COVID-19 coronavirus in New Delhi on March 28, 2020. (Photo by Bhuvan BAGGA / AFP)

Five photos have been shared thousands of times in multiple Facebook posts that claim they show people fleeing Myanmar and crossing the border to Thailand because of the coronavirus. The claim is false: two of the images -- one of which was taken by AFP -- actually show Indian migrant workers leaving Delhi during a government-imposed nationwide lockdown in March 2020. Other photos used in the misleading post have circulated in Thai media reports about border control measures.

The photos were published on Facebook here on September 8, 2020. The post has been shared more than 1,500 times. 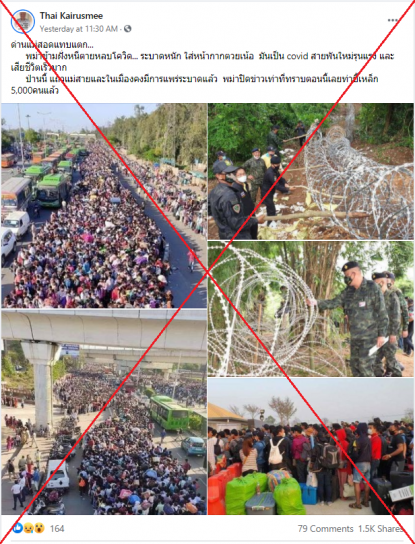 The post’s Thai-language caption reads in English: “Mae Sot checkpoint is about to burst… Burmese crossing over to escape from Covid. High infection rate please wear masks. It is a new strong strain of covid, can cause death quickly. By now Mae Sai will have been infected. Myanmar silences the news. From what we know now Tachileik already has 5,000 cases.”

Mae Sot is a town in western Thailand that shares a border with Myanmar to the west. Mae Sai District is the northernmost district of Chiang Rai Province in northern Thailand. Tachileik is a border town in Shan State in eastern Myanmar.

The photos were also published alongside a similar claim on Facebook here, here, and here.

The first photo in the set is actually an AFP photo showing Indian migrant workers queuing at the Anand Vihar bus terminal as they try to leave the capital Delhi during a government-imposed nationwide lockdown on March 28, 2020. Here is the photograph on the AFP Image Forum.

The second image shows the same scene as this AFP photo taken the same date and time in Delhi, which also shows migrant workers at the Anand Vihar bus terminal.

Below is a comparison of the first image in the misleading post (top) and the AFP image: 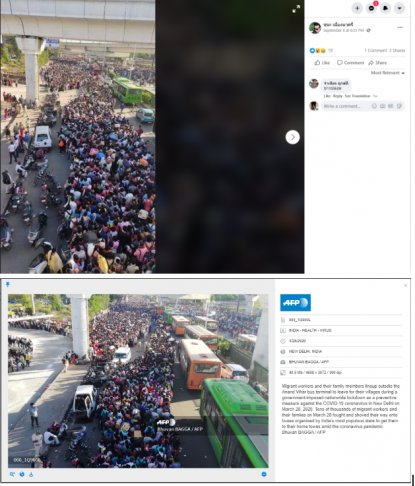 A version of the misleading photograph was also posted on Facebook on March 29, 2020 here by a maths teacher in Delhi, one day after the AFP photo was taken.

Very similar images of the queue of Indian migrants were posted here by a New Delhi based journalist on Twitter, and in the Times of India here.

The photos from Delhi circulated just days after Indian Prime Minister Narendra Modi ordered a 21-day lockdown to curb the spread of the coronavirus, as AFP reports here.

The third photo was published in this article by Khaosod, a Thai news website, on May 27, 2020. 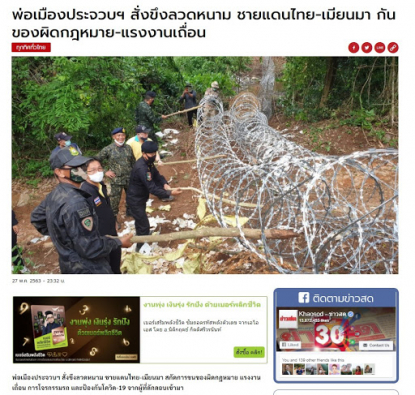 The article’s headline reads in English: “Prachuap Governor orders the deployment of barbed wires along the Thai-Myanmar border to obstruct contraband and illegal migrant workers.”

The fourth photo was published on this Facebook post by Wassana Nanuam, a Thai journalist, on July 13, 2020.

The Thai captions translate to English in part as: “Intercept migrant workers! Deploying barbed wires to the border.

The fifth photo was featured in this report by Thairath, a Thai media organisation, published on March 22, 2020. 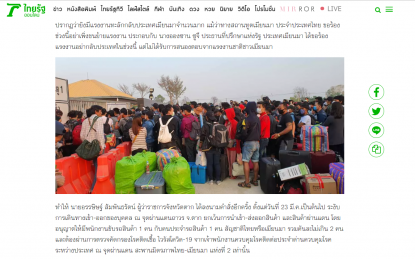 The report’s headline reads in English as: “Myanmar migrant workers choose not to remain in Thailand, tens of thousands wait to cross the border in Mae Sot, on the last day before borders close."