This Sri Lankan spice manufacturer said it has used the logo since 2007, years before the political party was established

A photo has been shared hundreds of times in multiple posts on Facebook and Twitter which claim it shows that packets of spice included in Sri Lankan government ration kits during the COVID-19 lockdown were branded with a local political party's logo. The posts allege that the photo is evidence vulnerable people are being exploited during the pandemic for political gain. The claim is misleading; both the manufacturer and retailer told AFP that it has used the logo on its packaging since at least 2007; the logo is not identical to the cited political party’s electoral symbol, which the party adopted in 2016.

The photo was published here on Facebook on April 6, 2020. It has been shared more than 700 times.

It shows two packets of curry and chilli powder distributed by the state-owned retailers, Lanka Sathosa. A flower symbol, printed on both packages, is circled in red. The post’s Sinhala-language caption, identical to the text superimposed on the image, translates to English as: “Condemn with disgust, the use of curry powder and chili powder packets given to helpless people at this time for politics.”

The posts suggest the flower symbol highlighted in the image appears similar to the logo for the Sri Lanka Podujana Peramuna (SLPP), the leading party in the current coalition government, established in 2016.

The Sri Lankan government announced in late March that it had joined forces with a number of food retailers to ensure delivery of "essential food items, medicines and gas", which include Lanka Sathosa, during the COVID-19 pandemic. The country has been put on a nationwide curfew.

Tony Rohitha Wijesinghe, the chairperson of Dil Foods, the manufacturer listed on the packets of spice, refuted the claim that its logo has any political connection.

During a phone conversation with AFP on April 6, 2020, he said: “I have been engaged in spice trading for about three decades and began supplying to the Sathosa chain in around 2007. I did a separate branding for spice packets supplied to Sathosa as opposed to my own, as I supply about 13 different varieties of spices and other condiments to the retail chain and I have continued with the packaging since.”

Wijesinghe added that he printed the packaging of the spice packets in the ration packs more than six months ago; long before the COVID-19 outbreak and the nationwide lockdown.

Nushad Perera, the chairperson of Lakna Sathosa, also told AFP that the packaging and logo have been used for more than one decade.

“We have no involvement in the branding and packaging of our external suppliers - it is the supplier’s wish. However, the supplier in question has been using this packaging for at least the past 10 years,” he said.

AFP also found promotional posters dating back to at least 2016 on the Facebook account for Lakna Sathosa here, which shows items printed with the same flower symbol.

Below is a screenshot of a Sathosa poster published on December 23, 2017: 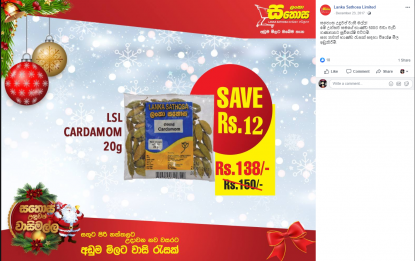 Closer analysis of the flower symbol also revealed that it is not identical to the SLPP’s electoral symbol.

Below is a screenshot comparison of the flower symbol on the spice packets in the misleading post (L) and the SLPP logo, taken from its website (R):

Screenshot comparison of the flower symbol on the spice packets in the misleading post (L) and the SLPP logo, taken from its website (R)