An photo showing Sri Lankan President Gotabaya Rajapaksa exiting a vehicle and two photos of a Mercedes-Maybach S650 sedan have been shared in multiple Facebook posts in October 2020 alongside claims that they show a vehicle newly procured by the government. The posts add that such money should have been spent on coronavirus testing equipment. The claim, however, is misleading; the Mercedes-Maybach S650 photos are from stock promotional content and Rajapaksa’s office stated that no new vehicles have been procured for the presidential fleet.

The post’s Sinhala language caption translates to English as: “What is a PCR machine...

“The money spent on buying this, could have been spent on 10 PCR machines as well as procuring over 20 million PCR test kits. 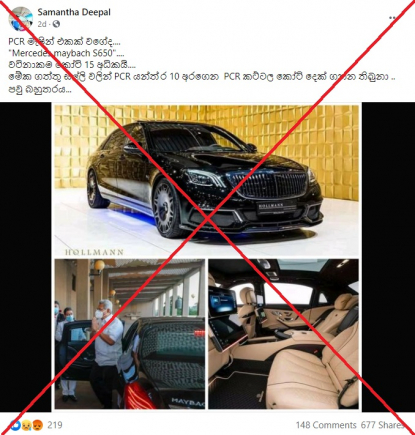 PCR machines are devices used for Covid-19 testing. The breakdown of a PCR machine at a hospital in Sri Lanka made headlines in late October after it delayed over 20,000 Covid-19 tests. The machine was fixed by Chinese technicians on November 3, 2020.

The photos were also shared alongside similar claims on Facebook here, here, here and here.

The head of the Presidential Secretariat Transport Division denied the claim, saying that no Mercedes-Maybach S650 cars were recently purchased.

The purchase of two Mercedes-Benzs in 2017 under former President Maithripala Sirisena was covered by the media at the time. A customs declaration was also published confirming the import of two Mercedes-Maybach S600 sedans.

Moreover, in January 2020, local media reported that Rajapaksa suspended the purchasing of new vehicles for state agencies and government officials for the next three years.

A reverse image search also found that the photo of Rajapaksa exiting a vehicle shared in the misleading posts was originally published on the president’s official Facebook page here on October 22, 2020. 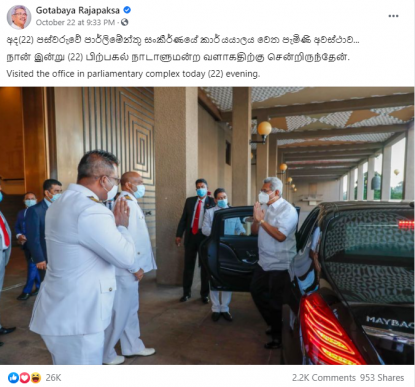 The image was originally published on President Rajapaksa's official Facebook page on October 22, 2020.

A review of photos and footage published on Rajapaksa’s Facebook page and by local news channels show the president consistently travelling in the same vehicle, as seen in February 2020 here and August 2020 here.

Further reverse image searches found that the interior and exterior photos of the Mercedes-Maybach S650 shared in the misleading posts are stock promotional content.