A photo has been shared in multiple Facebook posts that claim it shows a town in the Philippines devastated by the powerful Typhoon Goni. The claim is false; the photo actually shows a Philippine city destroyed by Typhoon Haiyan in 2013. 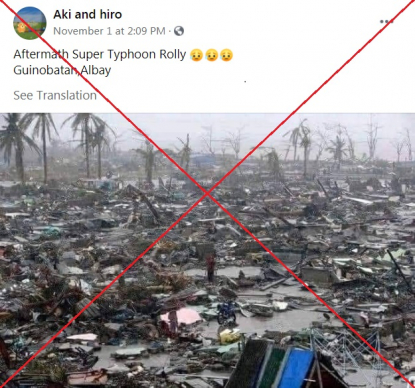 A screenshot of the misleading post, taken on November 4, 2020

“Rolly” is the local name for Typhoon Goni, which battered parts of the Philippines on November 1, 2020.

Identical photos were also shared alongside a similar claim on Facebook here, here and here.

A reverse image search on Google found the photo was published here by Reuters news agency on November 12, 2013, in the aftermath of Typhoon Haiyan. 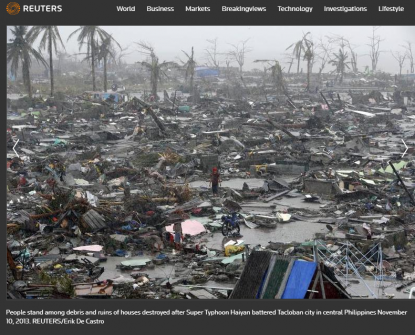 The photo is part of the slideshow titled: “Tacloban in ruins.”

The caption of the photo, the 12th in a slideshow of 36, says: “People stand among debris and ruins of houses destroyed after Super Typhoon Haiyan battered Tacloban city in central Philippines November 10, 2013.”

Below is a screenshot comparison of the photo in the misleading posts (L) and the Reuters photo (R):

Super Typoon Haiyan struck the Philippines on November 8, 2013, leaving more than 7,300 people dead or missing, AFP reported here. The city of Tacloban suffered the worst damage with hundreds of houses washed away by a storm surge.