Photos of elephants found dead in a Sri Lankan national park have been shared thousands of times in multiple Facebook posts alongside a claim that a Sri Lankan presidential candidate caused their deaths. The photos have been shared in a misleading context; authorities said preliminary post-mortems showed the elephants were poisoned and experts noted it was the result of the intensifying human-elephant conflict in the country. 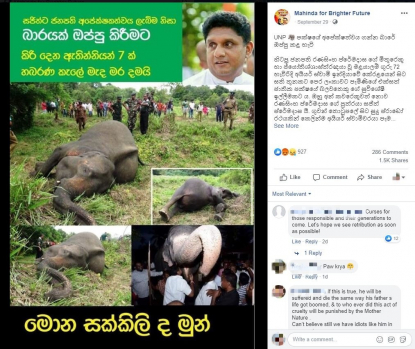 The Sinhala-language text superimposed on the post’s image translates to English as:

“In order to fulfill a vow due to being granted presidential candidacy, Sajith has killed seven nursing female elephants in the middle of the Habarana forest.

“What kind of low lives are they?”

By September 28, 2019, a total of seven carcasses of male and female elephants had been found in Habarana, a small city located in north-central Sri Lanka. Here is an AFP report about the incident.

The lengthy Sinhala caption that accompanies the misleading post is titled: “How the vow was fulfilled to obtain UNP candidacy”.

The Sinhala caption alleges Sajith was instructed by a South Indian occultist to make a vow to kill seven female elephants within a day, if he was chosen as the ruling party candidate. The caption goes on to claim the elephant carcasses reveal how Sajith fulfilled his vow upon being selected as the UNP presidential candidate.

The same photos were shared on Facebook here and here with a similar claim.

The photos in the post are being shared in a misleading context; authorities and local elephant conservationists told AFP preliminary investigations indicated the elephants were poisoned by local farmers after the animals damaged their crops.

Veteran elephant conservationist and member of the IUCN Asian Elephant Specialist Group, Jayantha Jayawardena, told AFP by phone on October 2, 2019, that the elephants were likely poisoned by local farmers.

“It appears the elephants may have consumed locally grown pumpkins and ash gourd that were poisoned with folidol. It was possibly an act of one or more angry farmers as they may have been experiencing a loss of crops for the past few months,” he said.

Folidol is an insecticide and is used by hunters and farmers to produce “hakka patas”, a locally made explosive trap where the folidol is mixed with gunpowder and inserted into vegetables targeting animals.

Jayantha also told AFP the human-elephant conflict in the country has intensified over the past few years, as human settlements have moved within the range of elephant corridors, resulting in the deaths of more than 200 elephants and about 50 humans annually.

“Sri Lankan elephants migrate internally, moving along elephant corridors depending on the availability of food and water. When villages and settlements encroach on these territories, elephant migration results in damages to crops,” Jayantha said.

Jayantha also completely dismissed the false claims made in the Facebook posts, noting “it's not an easy task” to kill seven elephants, as it is next to impossible for a human to get close enough to a wild elephant to physically harm it.

Director General of the Department of Wildlife Conservation, Chandana Sooriyabandara, told AFP on October 4, 2019, that investigators believe the elephants were poisoned.

“We suspect it's poisoning due to certain indications observed during on-site inspections, such as internal hemorrhaging. However, to probe further, samples of the bodies have been sent to the Government Analyst's Department, the Veterinary Research Institute of Sri Lanka and the Veterinary Faculty for further analysis,” he told AFP.

Chandana added they are expecting the results of the body sample analysis within the next few weeks, which he said should help apprehend the culprits.

“Due to increasing conflicts between villagers and elephants, various tactics have been deployed by villagers to keep the wild elephants at bay, which have at times resulted in their deaths. However, this is the first time we discovered the animals poisoned,” he added.

Elephant conservationist and chairman of the Species Conservation Centre, Pubudu Weerarathna, told AFP by phone on September 30, 2019, that on-site post-mortems revealed poisoning to be the cause of the elephant deaths.

“The on-site post-mortems have revealed the deaths were likely caused by poisoning,” he told AFP.

A similar false allegation was levelled against Sajith’s rival candidate, Gotabaya Rajapaksa, the presidential candidate of the Sri Lanka Podujana Peramuna, in this Facebook post. 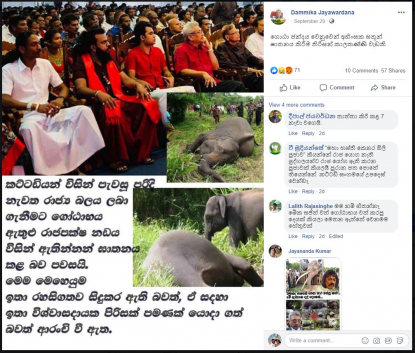 The Sinhala text superimposed on the post’s image translates to English as:

“As told by occultists, in order to regain state power, Gotabaya Rajapaksa and the gang have killed female elephants. It is told this operation was carried out in secret and had deployed a group of extremely trustworthy individuals.”

Similar allegations against Gotabaya were published in this article in Sinhala, titled “Since Gota doesn’t have a Raja yoga, seven female tuskers killed to make an offering of seven tusks”, on local news website SLStory.com.

Raja yoga in astrology denotes the formation of planets in a way that brings an individual the success and fortune of a king.

Sri Lanka has sought to introduce tougher penalties in a bid to protect wild elephants following the deaths of the seven elephants. Here is an AFP report about the developments.

This list was not published by Harvard University, but a student newspaper

No, volcanoes do not emit more carbon dioxide than human activity