Spaced out: No, the moon did not turn green on April 20

Claims that the moon would turn green on April 20, 2019, were shared hundreds of times in multiple posts on Facebook and Twitter that said the phenomenon is only seen every 420 years. The claim is false; similar posts are circulated each year, experts say it is impossible and the moon did not turn green on that date.

An image purporting to show a huge green moon was shared in multiple online posts, for example in this post published by a page with more than a million followers on April 12, 2019, and shared around 1,200 times since.

The post’s caption says: “Must see Green Moon” and the image contains text that says in capital letters:

“On April 20th, 2019 several planets are going to align which will cause the Earth’s moon to appear green for about 90 minutes. This phenomenon is known as ‘green moon’ and only happens once every 420 years please share this historic event.” 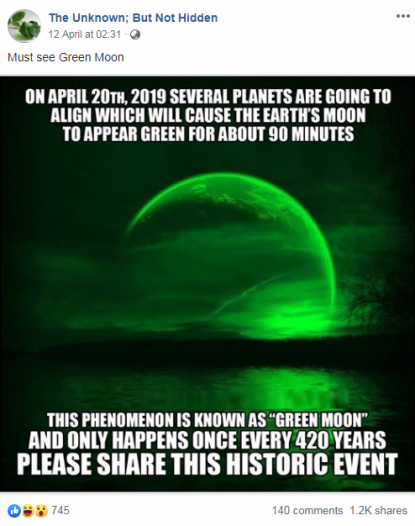 Other Facebook posts made the same claim about a green moon appearing this year, for example here, while a keyword search found similar images and claims shared in previous years, for example here on Facebook in 2016 and here on Twitter in 2017.

In popular culture, the number 420 and the date April 20 are used to refer to cannabis consumption, as described by the BBC here, in Time magazine here, and in this tweet by AFP.

A green moon did not appear in the sky on April 20, 2019, and planetary dynamicist Dr. Man Hoi Lee from The University of Hong Kong told AFP by email that the phenomenon is impossible:

The Hong Kong Space Museum told AFP that "there is no process in the nature that can create a green moon".

"We believe 'green moon' does not exist as there is no way that can make the moon green. The Sun is the only powerful light source in the Solar System. Its light shine on the moon and hence make it as bright as what we see on the sky. The moon turns red only during the total lunar eclipse when the light from the Sun is affected by the Earth's atmosphere so that only the red spectrum of the sunlight can reach the moon. There is no process in the nature that can create a green moon," they said in a statement emailed to AFP.

A Yandex reverse image search of the ‘green moon’ pictures found other examples in various other colours such as red and blue, as seen in the screenshot below: 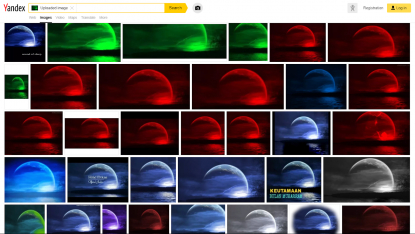 Articles debunking the false ‘green moon’ rumours have been published repeatedly online, for example here on EarthSky.org in 2018 and here on Space.com, saying that the green moon does not exist.

The rumor, according to the reports, shows up annually and has been spread for years.

UPDATE: This story was updated 09/05/2019 to include additional information from the Hong Kong Space Museum.

No, Australia’s Labor Party, the Greens and the ACTU did not sign an agreement to introduce a ‘death tax’

This video is of Algeria, and does not show Muslims attacking police in Denmark