A purported news article has been shared in multiple Facebook posts which claim the Lanka Premier League (LPL) was “ranked the biggest global sporting event of 2020”. The claim circulated online after the final match of the franchise cricket tournament of 2020. The claim is misleading; the purported article provided no evidence to support the claim and was not published on an official news site. There is no official ranking system for world sporting events, however, most large sporting events were cancelled in 2020 due to the coronavirus pandemic.

This blog post published on December 16, 2020 claims Lanka Premier League (LPL) was ranked the “biggest global sporting event of 2020”. It features a screenshot of an article that was published on a website named Washington Morning.

The post’s Sinhala-language caption translates to English as: “Eventually the victory is for our little Sri Lanka”. 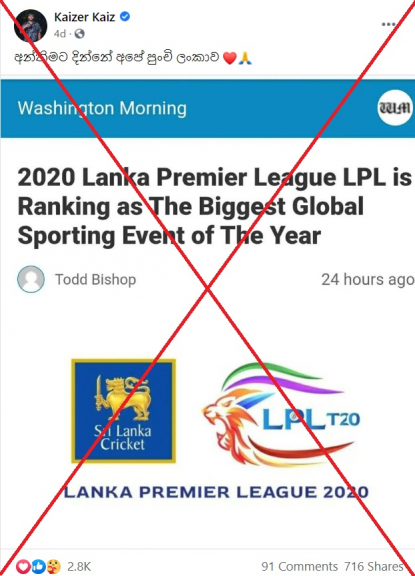 A similar claim was circulated on Facebook here, here, here and here. Identical text was seen in this blog post.

AFP located the article that was shown in the misleading post here on a site called Washington Times. The dateline is December 15, 2020.

Although the headline of the article is the same as in the misleading posts, the article’s body makes no mention of the LPL being ranked as “the biggest global sporting event of the year”. 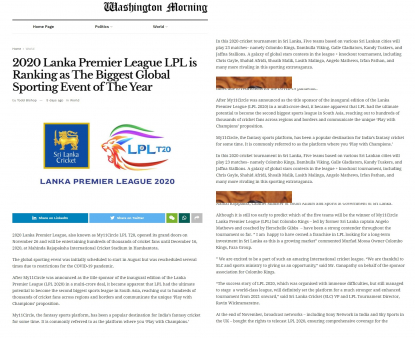 Screenshot of the article that was published on Washington Morning

A keyword search of the claim on Google did not yield any results except for the featured article on Washington Morning, which is not an official news outlet.

The site lists an address in New Jersey as its registered address, which is the same address as a New Jersey hotel.

There is no official ranking system for the world’s biggest sporting events.

Any major sporting events that were held have generally required crowds to maintain social distancing. Some events, such as cricket's Indian Premier League (IPL), have attracted huge viewer numbers on television, as reported here by Indian magazine Sportstar.