Skip to main content
Britain's Queen Elizabeth II reacts as she waits to thank local volunteers and key workers for the work they are doing during the coronavirus pandemic and over Christmas in the quadrangle of Windsor Castle in Windsor, west of London, on December 8, 2020. (AFP / Glyn Kirk) 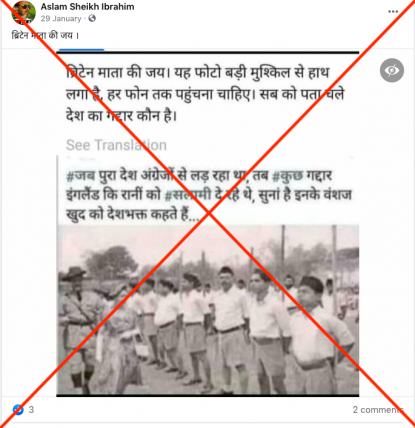 The post’s caption in Hindi translates to English as: “Long live the Queen of Britain.”

The Hindi-language text superimposed on the image translates to English as: “Long live the Queen of Britain, it was very difficult to find the picture, send this to everyone to show who is a traitor. When the entire country was fighting against the British, then some of these RSS traitors were saluting the Queen, and their descendants call themselves patriots.”

Rashtriya Swayamsevak Sangh is a right-wing organisation in India.

The photo was also shared here, here and here on Facebook alongside a similar claim.

The claim is false: the image is actually a composite picture of two different photos.

The photo of the Queen inspecting the Guard of Honour was published here on Twitter on November 24, 2018.

The caption reads: “Queen Elizabeth II inspects the Nigerian Army of the Royal West African Frontier Forces (Queen's Regiment) during her visit to Nigeria in 1956.” 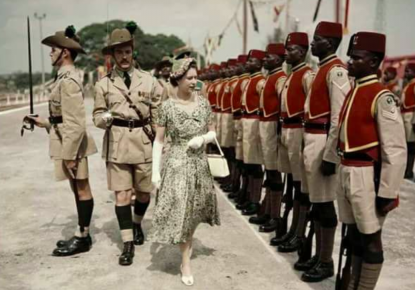 The other photo of RSS workers standing in a queue has been published by various Indian news websites, for example here on Deccan Chronicle and here on the Times of India. 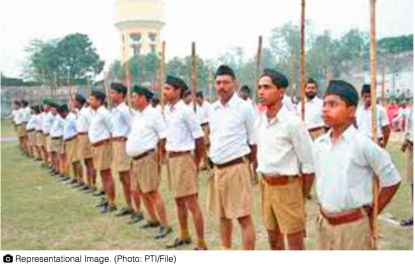