A list of 63 Singapore restaurants has been shared in multiple Facebook posts and in WhatsApp messages that claim the establishments’ Halal certification has been revoked by the Islamic Religious Council of Singapore, known as Muis. The claim is false; the same claim and list has circulated online since at least 2017; Muis told AFP it had not stripped the establishments of their halal status and said it had filed a police complaint about the misinformation; multiple restaurants on the list told AFP they were still halal certified.

The misleading post’s caption says in part: “MUIS has cancelled their halal-certified list. Check out the long list below.”

Muis is an acronym for the body’s official name, Majlis Ugama Islam Singapura. The same claim was also posted on Facebook here and here.

The claim is false; Muis has denied cancelling the restaurants’ halal certification.

"A text claiming that Muis has cancelled the halal certification of 63 eating establishments is making its rounds on WhatsApp again. Once again, we will like to clarify that this claim is absolutely false,” Muis wrote on Facebook on November 15.

Under Singapore law, Muis is the only organisation vested with the legal authority to issue Halal certifications, which attest that the food served is in accordance with Islamic principles.

The same claim and list of restaurants has circulated online since at least 2017, for example here.

For example, Hanis, New Hawa, and Makan Bagus Nasi Padang are not certified halal according to Muis’ official website.

The status of a restaurant's Halal certification can be checked on Muis’ official website here.

A search on Muis’ website reveal that other restaurants on the misleading post’s list, for example Siam Kitchen, were still certified halal.

Siam Kitchen told AFP on December 6, 2019 that: “All Siam Kitchen outlets managed by Creative Eateries, past and present, are Halal certified by MUIS.”

Below is a screenshot of the halal certification status of the restaurant on Muis’ website: 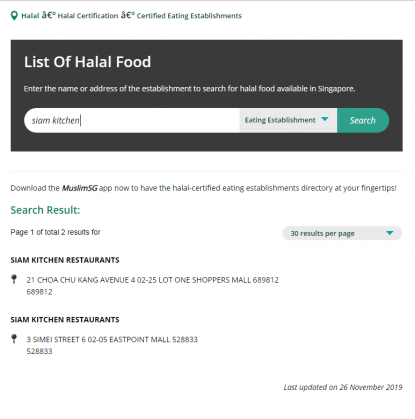 Another restaurant on the list, Seoul Garden HotPot, was also still listed as halal certified on the Muis website.

Below is a screenshot of the Muis listing: 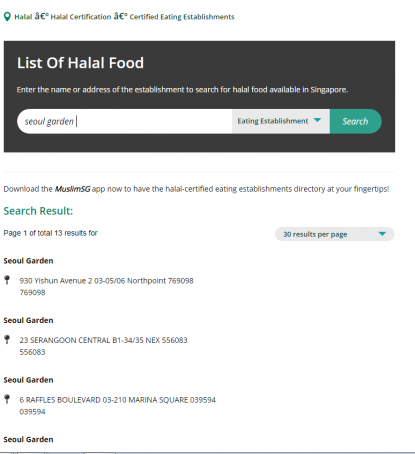