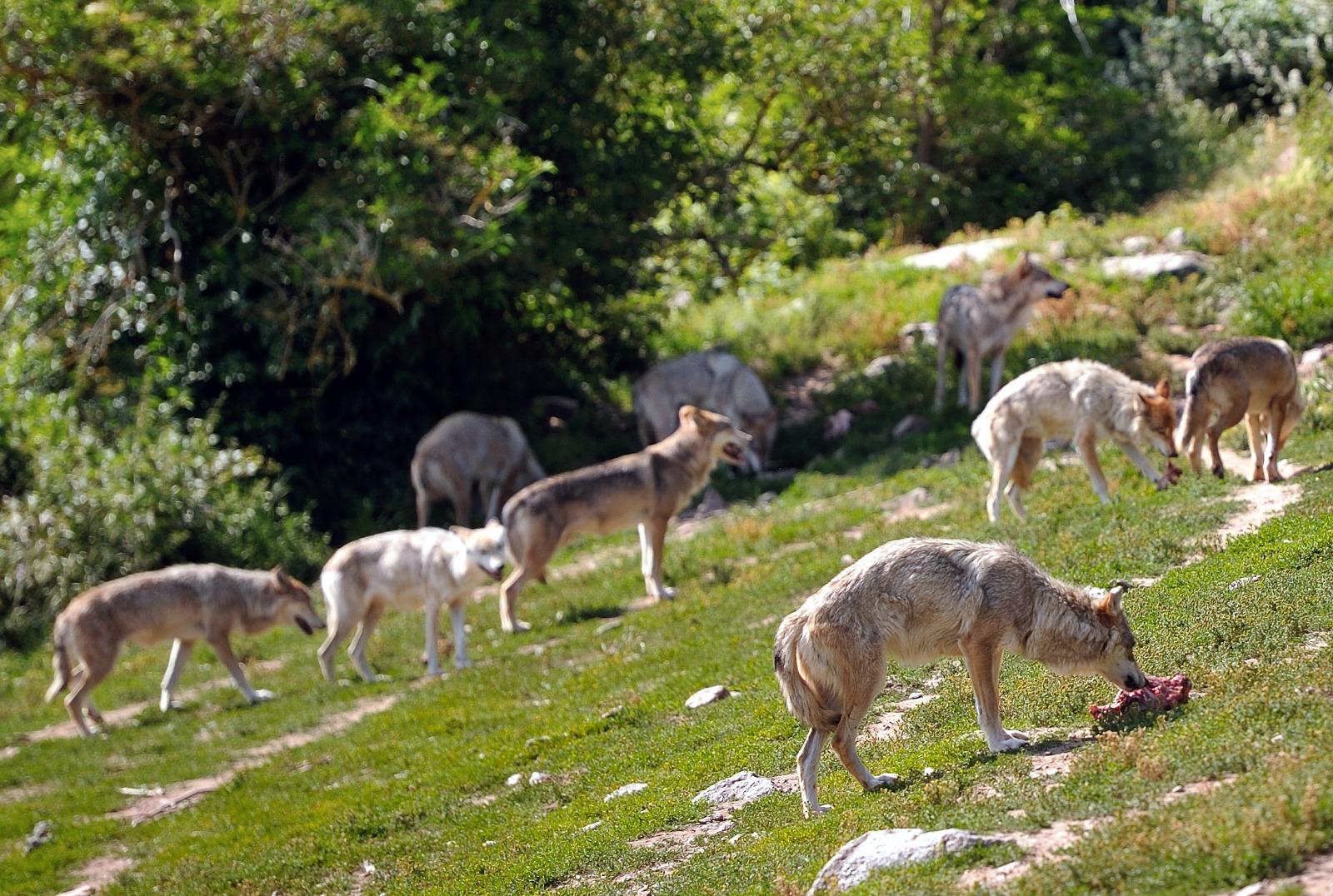 A pack of different species of wolves is pictured in central France on July 11, 2012 (AFP / Philippe Hughen)

Social media posts featuring an aerial photo of wolves in a line claim that the “old and sick” head the pack to “set the pace,” with the leader at the back and the strong positioned to offer protection. But experts say this is not an accurate description of wolf social behavior.

“We can all learn an invaluable Leadership Lesson from the pack of wolves,” a September 23, 2020 Facebook post begins.

“The 3 in front are old and sick. they walk in front to set the pace. The next 5 are the strongest. they protect the front side from an attack. The middle group is fully protected. The 5 behind them are also among the strongest. They protect the back side. The last wolf is the LEADER. He ensures no one is left behind...BEING A LEADER IS NOT ABOUT BEING IN FRONT. IT’S ABOUT TAKING CARE OF YOUR TEAM.”

The posts include a photo showing a pack of 25 wolves in a snowy passage, with groups of the animals circled in different colors to indicate position and supposed behavior. 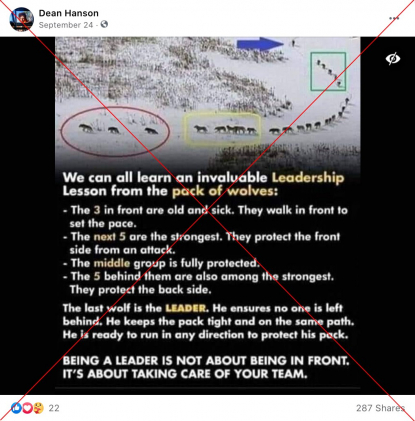 Another example of the post is available here. The post has been spreading in Spanish since at least 2015, and examples are available here, here and here.

A Google reverse image search leads to a photo gallery from British newspaper The Guardian dated October 19, 2011, which shows several snapshots from the “Frozen Planet” documentary, which aired on the BBC the same year.

The photo of the wolves appears in the gallery and is credited to Chadden Hunter, a director and producer for the BBC’s Natural History Unit.

The image’s caption reads: “A massive pack of 25 timberwolves hunting bison on the Arctic circle in northern Canada. In mid-winter in Wood Buffalo National Park temperatures hover around -40C. The wolf pack, led by the alpha female, travel single-file through the deep snow to save energy.”

“The size of the pack is a sign of how rich their prey base is during winter when the bison are more restricted by poor feeding and deep snow. The wolf packs in this National Park are the only wolves in the world that specialise in hunting bison ten times their size. They have grown to be the largest and most powerful wolves on earth.”

For a more complete explanation of the caption, AFP contacted ethologist and wolf specialist David Nieto Macein, who in 2015 wrote on this topic in Spanish on his blog.

“Groups of wolves are composed of a breeding couple and their offspring, meaning their descendants from the last litter and perhaps the previous one. In groups as large as the one hunting bison in this photo, there are usually some wolves added from other groups (ones that when they turn one year old, disperse and find a territory and a couple to form a family),” Nieto Macein told AFP.

“In this case, the one in front is the reproductive female, and the rest are simply following her… When wolves go through the snow, they follow each other’s footsteps,” he added.

Finally, on hierarchy and social behavior, Nieto Macein said that in nature, “there are no injured, old or sick. In the wild, animals can get sick, but the sick and the weak die.”

Therefore, contrary to what the post says, the order doesn’t denote which wolves are sick, but rather which is the mother or the father, “the leader of the group in this case. I don’t know if there was a male reproducer, or if he died,” the ethologist said.

The expert also ruled out any other subgroups in the herd, as the posts claim.

“Wolves are not animals that designate care for older or weak animals, and it is not a natural behavior to guarantee that nobody is left behind. The truth is that these animals need little protection, as one of the biggest groups of large terrestrial carnivores on the planet."

The posts are a clear example of anthropomorphism, Fernandez Suarez said.

“Animals have established hierarchies, but the majority of wolves live in family units, and although there are exceptions with large groups like the one in the photo, they do not have this kind of organization.”