Facebook posts shared thousands of times claim that Dubai ruler Sheikh Mohammed told the BBC in 2014 that his great-grandson will be “back on a camel”, implying that the wealthy emirate's development is diminishing. The claim is false: Sheikh Mohammed did not make such comments in the interview, where he said he aimed for Dubai to become “number one”. A similar quote has previously been attributed to Saudi politician Ahmed Zaki Yamani and the sheikh’s father Rashid bin Saeed Al Maktoum.

The claim was posted to Facebook by a Fiji-based user here. The post has been shared more than 6,000 times. The post claims Sheikh Mohammed bin Rashid al Maktoum -- the vice president and prime minister of the UAE, of which Dubai is one of the seven emirates -- made the comments after being asked about the “future of his country” during an “exclusive BBC interview”.

“My father was on a camel, I'm in a Mercedes, my son is on a Land Rover, and my grandson is going to be from Land Rover, but my great grandson will be back on a camel," he purportedly said.

According the post, the interviewer followed up asking him to clarify the statement, to which Sheikh Mohammed replied: "Tough times create strong men, strong men create easy times. Easy times create weak men, weak men create tough times. Many won't understand but you have to raise warriors, not parasites.”

Billionaire Sheikh Mohammed is known for his involvement in the global horseracing industry, and is owner of  the world's largest team Godolphin.

He has come under scrutiny in recent months over the disappearance of his daughter Sheikha Latifa, who has not been seen in public since a foiled attempt to escape Dubai in March 2018.

The sheikh’s alleged quote has circulated in Facebook posts around the world, including in Japan and Bangladesh.

However, the claim is false; Sheikh Mohammed did not make the alleged comments that his great-grandson would ride a camel in the BBC interview.

The post includes a screenshot taken from around three minutes and 36 seconds into this interview Sheikh Mohammed gave to the BBC in 2014.

Below is an image comparison of the image used in the Facebook posts (bottom) and footage from the 2014 BBC interview (top). 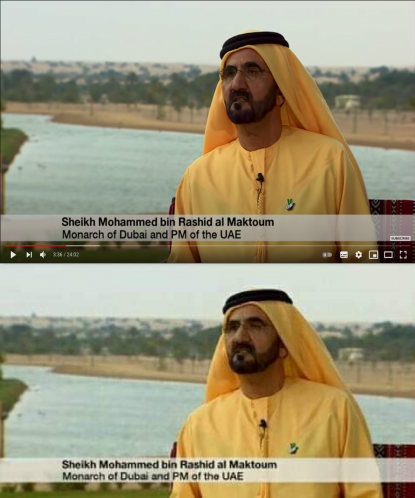 An image comparison of the image used in the Facebook post (bottom) and footage from the 2014 BBC interview (top).

The interview questions ranged from human rights in Dubai, a doping scandal involving one of the Sheik’s horse trainers and the resurgence of Dubai after a debt crisis.

However, when asked what his “vision for the future” for Dubai was, Sheikh Mohammed did not utter the quotes in Facebook posts. He said while he could not see the future, he wanted Dubai to be “number one”.

“But if you say now, 20 years from now, if we (are) still living, I cannot see what we are driving... My vision is for Dubai to be number one and (the) happiest nation. All that way. You know we want to be number one,” he said.

The two quotes used in the false Facebook post appear to be an amalgamation of the words of an author and a former ruler of Dubai.

A quote similar to “My father was on a camel, I'm in a Mercedes, my son is on a Land Rover...” has previously been attributed to both Sheikh Mohammed’s late father Rashid bin Saeed Al Maktoum.

"My grandfather rode a camel, my father rode a camel, I drive a Mercedes, my son drives a Land Rover, his son will drive a Land Rover, but his son will ride a camel” -- has been attributed to Rashid bin Saeed Al Maktoum, the former ruler of Dubai and father of Rashid al Maktoum and a similar quote has also been attributed to politician  Ahmed Zaki Yamani, according to the Oxford Reference Library.