Skip to main content
For the first time, this year, Rwandans commemorate the 1994 genocide at home as a preventive measure to contain the spread of the COVID-19. (AFP / Simon Wohlfahrt)

Articles shared thousands of times on Facebook and Twitter claim Rwandan President Paul Kagame censured the World Health Organization (WHO) for rejecting a herbal tonic touted by the Madagascan government as a cure for COVID-19. However, a presidential spokesperson dismissed the claim as “fake news”. No evidence was found to show Kagame made the comments. In fact, he has said his government is avoiding untested remedies.

In April, Madagascan President Andry Rajoelina launched a herbal concoction that he touts as a remedy for COVID-19. The drink was developed by the Malagasy Institute of Applied Research (IMRA) from indigenous herbs containing artemisia -- a plant with proven efficacy in malaria treatment.

However, the WHO has warned against “adopting a product that has not been taken through tests to see its efficacy” while the Africa Centres for Disease Control and Prevention said the infusion should be “tested rigorously”.

President Rajoelina has defended the potion and even had it shipped to Tanzania and Nigeria. As reported by AFP, Madagascar's official body in charge of drug control has not approved the drink for sale in the country.

One article circulating on Facebook that also claims Kagame said he wished former Libyan and Zimbabwean rulers, Muammar Gaddafi and Robert Mugabe, were still alive to fight for Africa, has been shared here on Facebook more than 9,000 times. 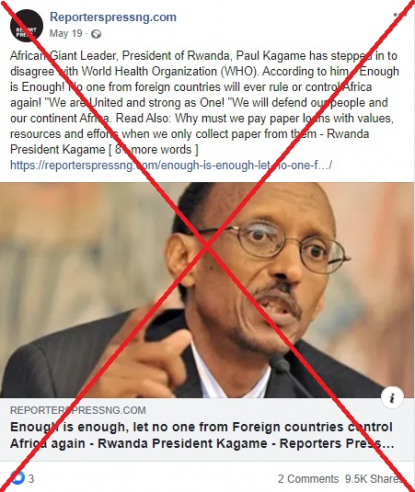 A screenshot taken on June 19, 2020 showing the false post

A similar article quotes Kagame as saying “enough is enough! no one from foreign countries will ever rule or control Africa again! We are united and strong as one! We will defend our people and our continent Africa. We are not cheap to be corrupted by WHO or evil people (sic).”

The article has been shared here and here.

The hoax articles claim that Kagame “has stepped into a fight against” the WHO. However, AFP Fact Check found no public record of Kagame opposing the health body's COVID-19 policies in local and international media.

When US President Donald Trump criticised WHO Director-General Tedros Adhanom Ghebreyesus’s handling of the pandemic in April, Kagame said the WHO “has the full confidence and support of Africa”.

Contacted by AFP Fact Check, a spokesperson for the office of the Rwandan government said the articles were “fake news”.

Totally Agree ,and asking this; Is it Dr.Tedros,WHO,China...under attack or all of them together? Let's focus on the fight against this pandemic,whoever sh'd be held acc'ntable will come later and done properly. Save us too much politics Africa does not need it. Who does? https://t.co/pNeKIRZGE1

Kagame said at a virtual press conference in April that he and other Rwandan leaders “give precedence to science” and believed herbal remedies should be treated with caution.

He was quoted by state-run Rwanda TV as saying “we accept guidelines by science and not things like witchcraft or statements made by people without scientific evidence to back the effectiveness of such statements, we are avoiding such things”.

“Medical experts and researchers are yet to fully understand the nature of COVID-19, even though some things like how to mitigate its spread have been established and how people can protect themselves from it,” he said.

Kagame added that Rwandan researchers were part of global efforts to find a vaccine for the disease.