Rhinos have not gone extinct

A recently published online article claimed that rhinoceroses have gone extinct, before then claiming that the last black rhinoceros died following a transfer to a new protected area. Both claims are false. While the western black rhinoceros subspecies was officially declared extinct in 2011, and eleven eastern black rhinos did die in July 2018 in Kenya, rhinos are not extinct.

"The last rhinoceros in the world dies. They are officially extinct," a sensationalist headline on VideoChaska announced in late July. The website is an online media outlet that often posts clickbait-style articles and false "life hack" claims. The story incorrectly reveals that it is not all rhinos but, in fact, all black rhinos that have succumbed to human interference.

According to the false article, the human interference came in the form of a transfer of rhinos from one national park in Kenya to an ecological reserve. Further down in the article, readers are told that two rhinos were transferred, and that while the male died, the female is still alive, though injured after an attack by a pride of lions.

The article has taken elements of several true stories about rhinos, but comes to false conclusions.

First, the western black rhinoceros, a subspecies of the Africa-native black rhinoceros, were officially declared extinct by the International Union for the Conservation of Nature (IUCN) in 2011, five years after its last known sighting in 2006.

Second, a rhinoceros transfer did occur in July 2018 when the Kenyan Wildlife Service moved 11, not two, eastern black rhinos from Nairobi and Lake Nakuru national parks to the Tsavo East National Park, according to the Kenyan Ministry of Tourism and Wildlife. 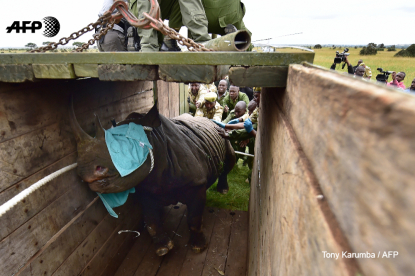 All eleven rhinos eventually died and on July 31, 2018, the Kenya Tourism Federation expressed "deep concerns and sadness in regards to the unprecedented tragic death of 11 rhinos in the recent translocation exercise."

After the first 8 rhinos died, the Kenyan ministry announced that the deaths had been caused by "salt poisoning as a result of taking water of high salinity on arrival in the new environment."

The eleventh rhino was attacked by a pride of lions and later died as well. 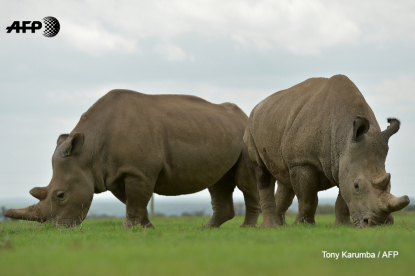 Although black rhinos are still rated "Critically Endangered" by both the World Wildlife Fund (WWF) and the IUCN, their population has been steadily rising for several decades. From a historic low of 2,500 in the 1990s, black rhinos have bounced back to between 5,000 and 5,500 individuals today, according to the WWF.