An article circulating on Facebook and Twitter claims that Nigerian schools will reopen on July 13, 2020, according to a government official. However, the claim is false; the author of the report admitted it was incorrect and Nigerian authorities have dismissed the claim.

The article has been shared more than 1,000 times on Facebook since it was published on a website called MySchoolNews.com.ng on June 3, 2020, according to data provided by social media monitoring tool CrowdTangle. 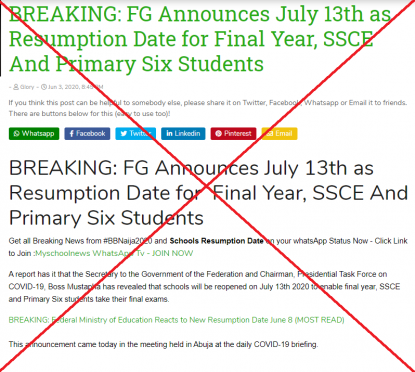 A screenshot taken on June 10, 2020, showing the misleading article

The article claims that the Secretary to the Government of the Federation of Nigeria, who doubles as the Chairman of the Presidential Task Force on COVID-19, Boss Mustapha, made the disclosure while briefing journalists in the capital Abuja. However, it does not quote him directly.

Similar versions of the claim surfaced online hours after MySchoolNews’ publication, including here and here, as well as on Jamyco, a website previously the subject of a debunk by AFP Fact Check.

MySchoolNews published another article on June 4, 2020, reporting on a statement purportedly released by the education ministry saying that universities and polytechnics would reopen on July 20, 2020 -- a week later than schools.

Both claims are false. No major Nigerian media reported on the purported resumption because Mustapha did not make such a statement, and neither was there any evidence to support the claim.

Shortly after MySchoolNews published the second article, it added a disclaimer, describing the press release it based the follow-up story on as “fake news”. 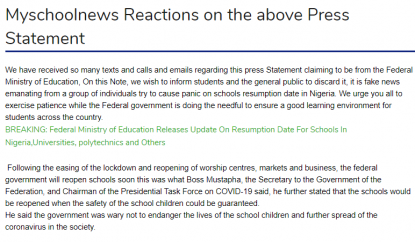 A screenshot taken on June 10, 2020, showing the disclaimer

“We wish to inform students and the general public to discard it (the education ministry press release, editor’s note), it is fake news emanating from a group of individuals try to cause panic on schools resumption date in Nigeria (sic),” it reads. “We urge you all to exercise patience while the Federal government is doing the needful to ensure a good learning environment for students across the country.”

MySchoolNews clarified that Mustapha said the federal government would reopen schools “following the easing of the lockdown and reopening of worship centres, markets and business” and “when the safety of the school children could be guaranteed”.

Nigerian education authorities denied the claims and said no decision had been made to reopen schools. The education ministry warned against “unconfirmed news” in statements posted to its official social media accounts.

“Kindly disregard all unconfirmed news not originating from the Ministry's Official Media Handles,” the ministry said on Facebook and Twitter on June 4, 2020. “The Official date for Resumption of Schools Nationwide is yet to be confirmed.”

Schools in Nigeria have been closed since March 2020, with Health Minister Osagie Ehanire saying the government was still working to “judge when it is safe” to resume classes.

However, Africa’s most populous country eased restrictions on religious gathering on June 1, 2020, for an initial period of four weeks in line with many of its west African neighbours.