A report has been shared in multiple posts on Facebook, Twitter and Reddit in February 2020 which claims the Vatican disclosed that Pope Francis had been infected with the novel coronavirus, COVID-19. The claim is false; the Vatican said Pope Francis recently fell ill with a common cold; the site that published the misleading claim is not a reputable media organisation.

The report, which includes several photos of a visible ailing Pope Francis, was shared in this Facebook post on February 29, 2020. 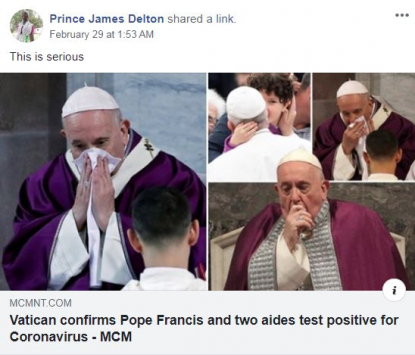 “The Vatican has confirmed in a statement that Pope Francis and two of his aides have tested positive for the novel Coronavirus,” the article states. “Pope Francis missed a planned Mass with clergy in Rome yesterday after showing Coronavirus-like symptoms.”

The report was published by a website called “Make Comments Meaningful”.

The report is not dated. It includes photos of the pope taken on February 26, 2020 by the Associated Press and Reuters published here and here. 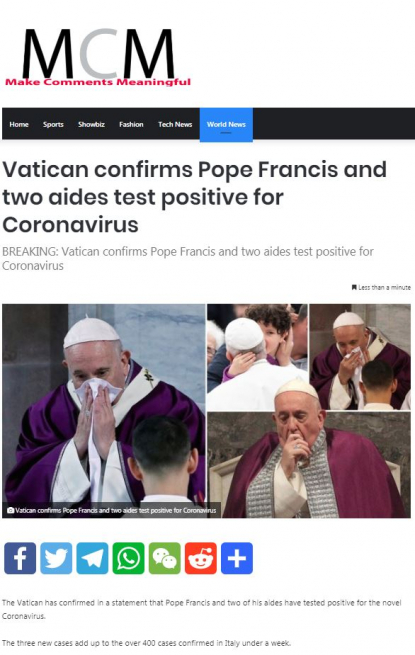 The 83-year-old pontiff was recently suffering from a cold, as AFP reported here on March 1, 2020.

But the claim that the Vatican confirmed he had contracted the novel coronavirus is false.

Vatican spokesman Matteo Bruni said in a statement that "the cold diagnosed (in the pope) was running its course, without symptoms attributable to other pathologies,” AFP reported on March 4.

The statement was released after Messaggero, an Italian newspaper, reported that Pope Francis had tested negative for the novel coronavirus. The Vatican’s statement did not directly confirm or acknowledge the reported test.

Keyword searches on the websites of the Vatican Press Office and Vatican News also found no statements about Pope Francis contracting the novel coronavirus.

A closer analysis of the website “Make Comments Meaningful” reveals it is not a legitimate news site.

Its reports do not have bylines and the sources for its reporting are vague. The site also does not have any description section detailing the nature of the organisation or how to contact the site's creators.

The false report about the pope was also debunked by multiple fact-checking organizations, including Snopes, Politifact and the Taiwan Fact Check Center.