This is a 2018 photo of a child at a hospital in Damascus, Syria

A photo of a bloodied child has been shared hundreds of times in multiple posts on Facebook and Twitter which claim that it shows a boy who was attacked during the recent deadly sectarian violence in the Indian capital of Delhi. The claim is false; the photo shows a child at a makeshift hospital in Syria in 2018. 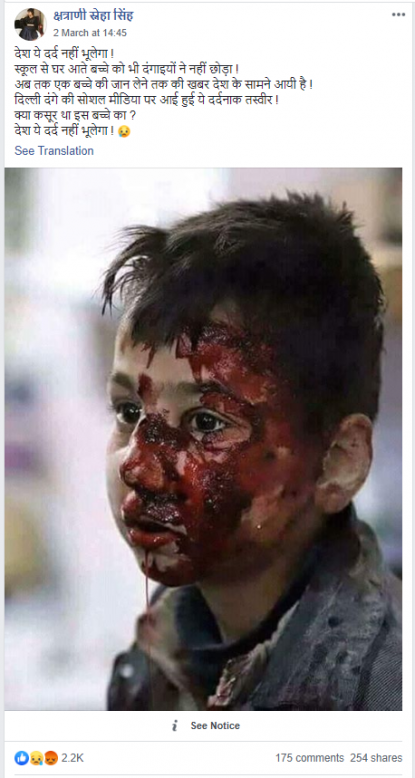 The photo’s Hindi caption translates to English as: “The country will not forget this pain. The rioters did not even spare this kid, who was returning from school. Till now, we have news of the killing of one child. This is the horrifying picture of Delhi riots on social media. What was the fault of this kid? The country will not forget this pain.”

Consecutive months of protests against Prime Minister Narendra Modi's 2019 citizenship law escalated dramatically between February 24 and February 26, 2020. At least 42 people have been killed in the sectarian violence, as reported here by AFP.

This claim is false; this is a 2018 photo taken in Syria. It shows a boy awaiting treatment at a makeshift hospital on the outskirts of the Syrian capital, Damascus, after being injured during government bombardments on February 21, 2018.

A reverse image search on Google found a larger version of the same photo published here on Getty Images website, with a February 21, 2018 dateline.

The website credits AFP photographer Amer Almohibany as a contributor.

A further keyword search found the photo also published here on the AFP Forum website on the same date.

Below is a screenshot of the photo on the AFP website: 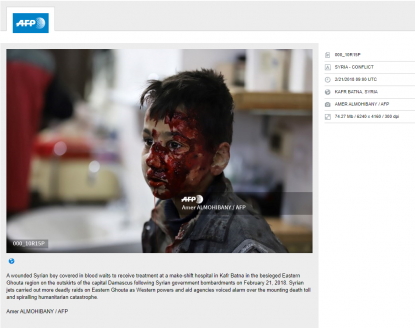 The photo caption reads: "A wounded Syrian boy covered in blood waits to receive treatment at a make-shift hospital in Kaur Banta in the besieged Eastern Gout region on the outskirts of the capital Damascus following Syrian government bombardments on February 21, 2018. Syrian jets carried out more deadly raids on Eastern Gout as Western powers and aid agencies voiced alarm over the mounting death toll and spiralling humanitarian catastrophe.”