Multiple posts have been shared thousands of times in on Facebook which claim Australian Prime Minister Scott Morrison has given himself a pay rise, while his New Zealand counterpart Jacinda Ardern has frozen the salaries of the country’s politicians “until economy improves for citizens”. The claims are misleading; the renumeration for Australia and New Zealand’s politicians is determined by independent statutory bodies, not the prime ministers; a salary freeze was indeed imposed on New Zealand’s politicians in 2018, but it was in place to establish a fairer system that determines pay increases for key office holders, not because of economic conditions.

It shows a photo of New Zealand Prime Minister Jacinda Ardern on the top left-hand corner, and that of Australian Prime Minister Scott Morrison on the bottom right.

The text next to Morrison’s photo states: “Australian PM gives himself a big pay rise, then cuts working class wages”. 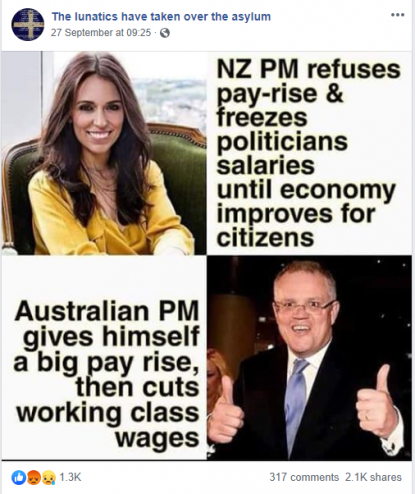 The same meme has also been shared thousands of times on various Facebook pages here and here.

It has also been posted here on “Australia’s Page”, which is followed by more than 500,000 Facebook users.

The claims are misleading; the prime ministers of Australia and New Zealand do not set the pay of their countries’ politicians; New Zealand politicians were subject to a salary freeze in 2018, but for other reasons than a bad economy.

In Australia, the pay for Members of Parliament (MPs) is determined by the Remuneration Tribunal, an independent statutory authority established in 1973.

The Tribunal is required by law to conduct an annual review on MPs’ pay and in 2019, it announced a two percent pay increase for public offices effective July 1, 2019.

The Tribunal said its decision was made based on “economic conditions in Australia, past and projected movements in remuneration in the public and private sectors (including the Australian Public Service), as well as the outcomes of reviews of public offices completed by the Tribunal.”

2019 was the third consecutive year when the Tribunal handed down a two percent pay rise for all MPs, as seen in the table below: 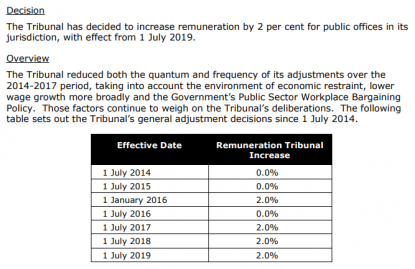 As a result of the 2019 pay adjustment, Prime Minister Scott Morrison would receive a pay jump of just over $10,000, the Australian Associated Press (AAP) reported on June 7.

On the same day as the MPs received a pay rise on July 1, the third phase of a 2017 Fair Work Commission decision to cut weekend penalty rates for workers in retail, hospitality, fast food and pharmacy industries also came into force.

Australian trade union United Voice told AAP those workers could lose up to $2,000 a year under further penalty rate cuts.

That decision was made by the Fair Work Commission, an industrial relations tribunal, not the prime minister; in 2017, Morrison was serving as Australia’s treasurer.

Similarly in New Zealand, the independent Remuneration Authority decides on the pay for key office holders.

In August 2018, Prime Minister Jacinda Ardern announced a government decision to freeze the salaries and allowances for all MPs for a year until July 2019, as the proposed pay increase was “unacceptably high”.

The pay freeze was not in place “until economy improves for citizens” as the misleading post claimed.

In August 2019, Workplace Relations and Safety Minister Iain Lees-Galloway said a fairer system that set MPs’ pay increases had been established following the completion of a review that took place between 2018 and 2019.

These photos do not show meningococcal disease cases in the Philippines; health officials said the disease is 'sporadic' and not spreading