Skip to main content
Speaker of the House Nancy Pelosi holds her weekly press conference at the US Capitol on January 7, 2021, a day after supporters of President Donald Trump stormed the building during the certification of Joe Biden’s presidential election victory (AFP / Brendan Smialowski)

Quotes from US Democrats falsely characterized as calls for violence

Social media posts shared after the storming of the US Capitol by followers of President Donald Trump combine images of prominent Democrats with pictures of burning buildings and quotes suggesting that the politicians previously incited unrest. But the full remarks which the quotes came from make clear that the Democrats were not calling for violence or vandalism.

“NEVER FORGET: Democrats have been stoking public unrest and violence for years!” says a January 8, 2021 post from The Great American Movement, which describes itself as a political organization and whose website says there is a “war against America and her values.” Other versions of the post use similar quotes with the speakers shown pictured in front of raging structure fires, implying that they endorsed the violence and arson that occurred in connection with some of the largely peaceful protests against racism and police brutality in 2020.

Among those who posted those images was radio host Ben Ferguson, whose Facebook page shows him in the Oval Office beside Trump. His January 7 post is no longer available.

Other posts, including on Instagram and on Facebook, contrasted the Democrats’ comments with Trump’s calls for his supporters to remain peaceful on January 6, the day the Capitol was stormed.

But this too lacked context. He had also called on his supporters to “fight.”

Below, AFP Fact Check analyzes the quotes cited in the posts.

Kamala Harris: “Protesters should not let up” and “They’re not gonna let up and they should not.”

Harris made the comment in a June 18, 2020 interview with television host Stephen Colbert, who asked what the Black Lives Matter demonstrations for equal justice meant in terms of affecting legislative change.

The interview included no discussion of violence. Harris spoke of the multi-racial makeup of the protesters and their “commonality of spirit.”

Her comments about the protests have been misinterpreted before, as fact-checking organization Snopes concluded in October.

After police shot an African American man in Wisconsin, leading to protests and unrest, Harris said she would “always defend” peaceful protesters but they should not be confused “with those looting and committing acts of violence.”

Nancy Pelosi: “I just don’t know why there aren’t uprisings all over the country, and maybe there will be.”

According to a transcript from her office, Pelosi made the comment on June 14, 2018. It was a reference to the Trump administration’s highly-controversial policy at the time of separating children from their parents at the southern US border in a bid to discourage undocumented immigration.

The top Democrat denounced the “barbaric” practice against parents who “took these children to escape possible death, rape, gang violence where they live, and they have no alternative but to try to seek asylum in the United States.”

She rejected suggestions of a legislative fix and said the administration could easily reverse its policy. “I just don't even know why there aren't uprisings all over the country, and maybe there will be, when people realize that this is a policy that they defend,” she said.

Maxine Waters: “If you see anybody from that cabinet in a restaurant, in a department store… you get out and you create a crowd and you push back on them.”

The California congresswoman made the comments, also about the Trump team’s immigration policies, at a time when some administration staffers had been confronted by protesters while dining.

"If you see anybody from that cabinet in a restaurant, in a department store, at a gasoline station, you get out and you create a crowd, and you push back on them, and you tell them they're not welcome anymore, anywhere," she told her supporters.

“We’ve got to get the children connected to their parents. The children are suffering.”

Ayanna Pressley: “There needs to be unrest in the streets.”

The Massachusetts congresswoman made the remark in an August 15, 2020 interview with MSNBC, but there was no suggestion she was calling for violent unrest.

She also called for “organizing and mobilizing and applying pressure,” including through phone calls and emails, on Republican senators and governors who were “turning a deaf ear to the needs of our families and our communities.”

“There needs to be unrest in the streets for as long as there is unrest in our lives, and unfortunately there’s plenty to go around,” she said.

Donald Trump: “I’m asking for everyone at the US Capitol to remain peaceful. No violence!”

The Trump Twitter Archive confirms Trump issued this tweet at 3:13 pm local time, following one at 2:38 pm which said “Stay peaceful!” -- nine minutes after hundreds of protesters forced their way into the Capitol complex where legislators were meeting to certify Joe Biden’s victory in the 2020 presidential election.

Twitter permanently suspended Trump’s account over the risk of “further incitement of violence” after the January 6, 2021 riot that left one US Capitol police officer dead and a woman fatally shot by police.

The crowd had marched to the seat of the House of Representatives and Senate after a speech by Trump that was filled with false claims of election fraud that he suggested must be resisted.

In that speech, he did say that his followers would “peacefully and patriotically” make their voices heard. 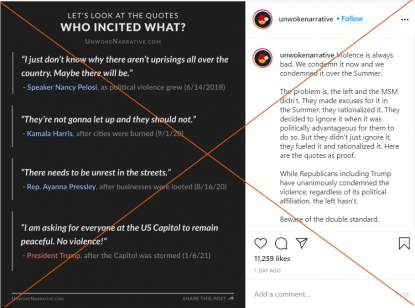 -“If you don’t fight like hell, you’re not gonna have a country anymore.”

-“Our country has had enough. We will not take it anymore… We will stop the steal.”

-”We will not let them silence your voices.”

-”We’re just not gonna let that happen.” (In reference to Biden taking office.)

-We are gathered “to save our democracy.”

-”Our country will be destroyed and we’re not gonna stand for that.” (In reference to Biden being in office.)

Trump’s call to “fight like hell” is cited in the article of impeachment introduced on January 11 by three congressmen accusing him of “incitement of insurrection.”

He was impeached by the full House on January 13, becoming the first president to be twice impeached.