Skip to main content
Supporters of US President Donald Trump clash with the US Capitol police during a riot at the US Capitol on January 6, 2021, in Washington, DC (AFP / Alex Edelman)

Social media posts say Democrats are trying to pass legislation to classify Make America Great Again rallies as “domestic terrorist activities.” This is false; the “Domestic Terrorism Act,” an effort led jointly by Senator Richard Durbin and Representative Brad Schneider, does not mention MAGA rallies and would not redefine the meaning of “domestic terrorism” under US law.

“DEVELOPING: Democrats in both the House and Senate are planning to draft legislation to classify MAGA rallies as "domestic terrorist activity" and require the FBI, DOJ & DHS to take steps to prevent such ‘domestic terrorism,’” a January 10, 2021 tweet by Paul Sperry reads, adding that the move is being pushed by Durbin and Schneider.

Sperry is described by The Bridge Initiative, a research project housed in Georgetown University that focuses on Islamophobia, as an American conservative journalist with a “long record of promoting anti-Muslim conspiracy theories.” 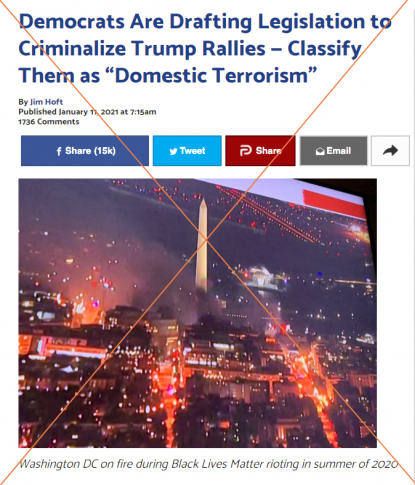 A screenshot of the headline of a Gateway Pundit’s article taken on January 12, 2021

It would “focus their resources on the most significant domestic terrorism threats, and provide training and resources to assist state, local, and tribal law enforcement in addressing these threats,” she said.

The text of the bill can be found here and does not mention MAGA rallies. It states: “White supremacists and other far-right-wing extremists are the most significant domestic terrorism threat facing the United States.”

A House of Representatives companion bill spearheaded by Schneider during the 116th Congress has not yet been introduced to the new Congress that opened on January 3, 2021.

“You’ll notice a conspicuous absence in reference to ‘MAGA’ anything. The bill would also not change the existing definition of ‘domestic terrorism’ in US law,” Matt Fried, communications director for Schneider, said by email.

According to US law, the term “domestic terrorism” means “activities that involve acts dangerous to human life that are a violation of the criminal laws of the United States or of any State or appear to be intended to intimidate or coerce a civilian population; to influence the policy of a government by intimidation or coercion; or to affect the conduct of a government by mass destruction, assassination, or kidnapping; and occur primarily within the territorial jurisdiction of the United States.”

There is no mention of any specific political affiliation in the US code definition of “domestic terrorism.”

On January 12, Durbin tweeted that those involved in the recent deadly mob attack on the US Capitol by some of President Donald Trump’s supporters, “as well as members of their domestic terrorist organizations,” needed to be “held accountable for their crimes & Congress must act to prevent future attacks.”

During his 2020 campaign, President-elect Joe Biden pledged his administration would restore funding to address domestic extremism, and work for a “domestic terrorism law that respects free speech and civil liberties, while making the same commitment to root out domestic terrorism as we have to stopping international terrorism.”