A post shared several thousand times on Facebook claims that the Nazi war criminal Hermann Goering said during the Nuremberg trials that "the only thing a government needs to turn people into slaves is fear." However, there is no trace of the statement in trial records, and a similar remark found in a book by a psychologist who collected Nazi testimonies related to war, not fear.

“75 years ago Hermann Göring was asked at the Nuremberg trial how the Germans had accepted all of this. He replied: ‘It’s very easy and it has nothing to do with Nazism; it has to do with human nature,’” reads a September 25, 2020 Facebook post.

The post continues: “You can do this in a Nazi regime, socialist, communist, monarchy or democracy: the only thing a government needs to turn people into slaves is fear. If you can find something to scare them you can make them do anything you want.”

The post, which has also been circulating in French and in Polish, has been widely shared in the US and Canada amid protests against measures put in place to combat the Covid-19 pandemic. 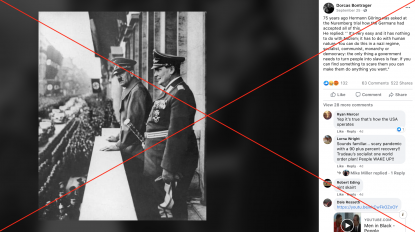 The accompanying picture shows Goering standing next to Hitler in Vienna in 1938.

However, no trace of the purported quote can be found in the Nuremberg trials archive, found here in English and here in German.

The posts emerged after Robert Kennedy Jr., the nephew of former US president John F. Kennedy, who has been shown to spread conspiracy theories about the pandemic, attributed a similar quote to Goering during a demonstration against Covid-19 measures in Berlin in August.

A Google search for Goering quotes on fear leads to the book “Nuremberg Diary” by American psychologist G.M. Gilbert, who collected the testimonies of Nazi leaders.

“Naturally, the common people don't want war; neither in Russia nor in England nor in America, nor for that matter in Germany. That is understood. But, after all, it is the leaders of the country who determine the policy and it is always a simple matter to drag the people along, whether it is a democracy or a fascist dictatorship or a Parliament or a Communist dictatorship,” Goering reportedly told Gilbert in his cell on the evening of April 18, 1946.

Gilbert replied: “There is one difference(...) In a democracy the people have some say in the matter through their elected representatives, and in the United States only Congress can declare war.”

To which Goering said: “Oh, that is all well and good, but, voice or no voice, the people can always be brought to the bidding of the leaders. That is easy. All you have to do is tell them they are being attacked and denounce the pacifists for lack of patriotism and exposing the country to danger. It works the same way in any country.”

At the opening of the Nuremberg trials in 1945, Goering was the highest dignitary of the Third Reich still alive after the deaths of Adolf Hitler, Joseph Goebbels and Heinrich Himmler. Hitler’s former right-hand man, he served as aviation commissioner, commander of the air force (Luftwaffe), Minister of the Interior of Prussia and head of the ‘Four Year Plan’ economic policy.

The trials opened on November 20, 1945, but it was not until March 13, 1946 that Goering began his testimony, which lasted eight days. He was sentenced to death by hanging but killed himself a few hours before his planned execution on October 15, 1946.