Presidential spokesman Garba Shehu recently tweeted that malaria kills 822 people in Nigeria every day. This is false; the latest World Health Organization (WHO) data does not support the claim. The last time the disease was so deadly was in 2009.

After Nigeria confirmed its first case of novel coronavirus on February 28, 2020, all major newspapers in the country led with reports on the virus.

In response, Garba Shehu, special media adviser to President Muhammadu Buhari, asked on March 1, 2020 when the spotlight would shift to the 822 people “killed by malaria everyday in Nigeria [sic]”. 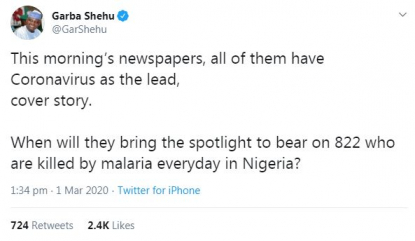 A screenshot taken on March 2, 2020, showing a tweet by Nigeria’s presidential spokesman who alleges that 822 people die from malaria daily in the country.

What do the statistics say?

In the same period, Nigeria’s death toll fell by about a third.

Has malaria ever killed 822 per day in Nigeria? 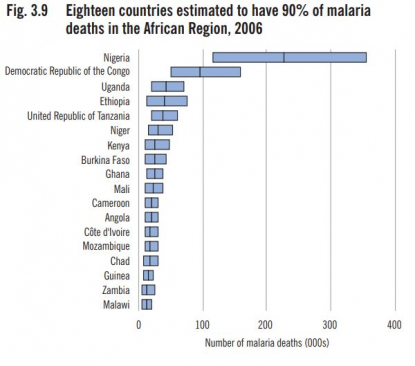 For Nigeria to record 822 deaths from malaria every day, means  300,030 deaths in total a year -- two-thirds more than the most recent official figures

In 2009, the World Bank stated that more than 1,000,000 people died from malaria every year, including “more than 300,000 Nigerians” -- the last time the country had more than 300,000 estimated malaria deaths since the inception of WHOs comprehensive World Malaria Report in 2005.