A video has been viewed tens of thousands of times in social media posts that claim it shows police attempting to close down a beach in Brazil due to Covid-19 restrictions. The video has been shared by anti-lockdown pages on Facebook and Instagram. But the claim is false: the video has circulated online since 2012; it actually shows crowds being dispersed due to restrictions on playing “altinha”, a popular beach game in Rio de Janeiro, local media reported at the time.

The blurry footage shows a dispute on a beach, with dozens of people clapping and shouting.

“Brazil. Police try close down the beach due to Covid19 restrictions, met with Absolute Fury by The People. This is what's needed, don't allow illegitimate Restrictions to dictate your LIFE. Long Live Freedom,” the caption reads. 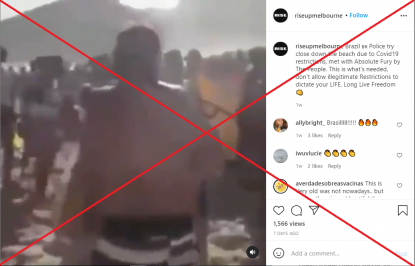 The video was shared in this Facebook group which regularly posts videos of anti-lockdown activists clashing with police, and in this tweet, where it has been viewed more than 25,000 times.

It was also posted by several news Facebook pages in Brazil, including here and here.

A YouTube search of related keywords from the misleading post led to this video which shows a fight on Ipanema Beach, published on October 11, 2012.

A translation to English of the video’s title reads: “Fight on ipanema beach 2 days after mayor Eduardo Paes is re-elected”. 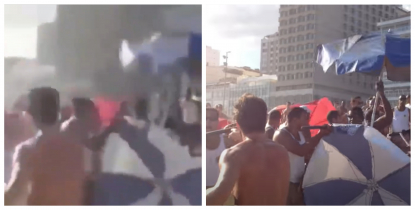 A Google search of keywords related to the video led to various news articles from October 2012 about a disagreement between beachgoers and municipal guards.

According to local media reports, the images show an incident on Ipanema beach in Rio de Janeiro after city guards restricted the practice of altinha, a popular sport on the city’s beaches that consists of kicking a ball between players, similar to keepy-uppy.

The misleading video circulated online following the city of Rio de Janeiro’s decision to close beaches as of March 20, 2021, in order to curb a spike in Covid-19 cases.

On April 9, 2021, city officials eased restrictions on the opening of bars and restaurants, but beaches remain closed.

Brazil has recorded the third most Covid-19 cases in the world, after the United States and India, with 13 million cases, according to an AFP tally on April 12, 2021.