Social media posts claim that the words “How To Hit A Woman So No One Knows” were searched on Google 163 million times in 2020, during the pandemic. This is false; the claim is based on a study whose author admitted to using flawed methodology that produced inaccurate results. 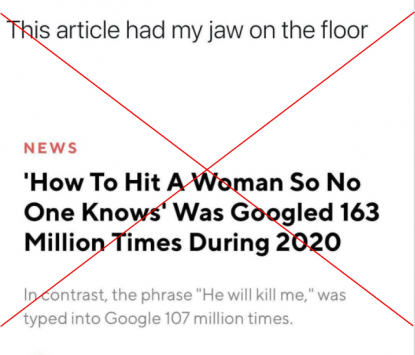 A screenshot taken May 6, 2021 of an article shared on social media

AFP found that the screenshot in the post came from a piece published by the media company Blavity on April 27, 2021.

The article's headline has been changed to “Domestic Violence Cases On The Rise In Covid-19 Pandemic,” but an archived version of the original publication is available here.

Despite the update, screenshots showing the earlier headline continued to be shared on Instagram here and here and Facebook here and here.

The Blavity.com article was based on other media reporting about a study published in The Journal of General Psychology in January 2021.

An abstract of that study said it “accessed rapidly available data using Google Date Range analysis by utilizing queries from pre- and post-pandemic comprising the months of March-August in the years 2019 and 2020.”

Shortly after public reporting appeared about her study, Katerina Standish, director of research with the National Centre for Peace and Conflict Studies at New Zealand's University of Otago, released a statement in a thread on Twitter admitting her work was “flawed.”

“An article came out yesterday that has generated a lot of scrutiny about the web research paper I wrote last November looking for online indicators of psychological stress related to unemployment, suicide and indicative and intentional male violence,” she wrote.

Standish admitted that the findings had “shortcomings.”

“Web researchers have cogently detailed that despite best intentions, the method I utilised in this paper, and therefore my results are inaccurate,” she concluded.

Standish did not respond to AFP’s request for further comment.

In addition to changing the headline, Blavity.com issued a correction explaining that, after the initial information was published, “the researcher behind the study wrote on Twitter that she found flaws in her methodology and that her findings were ultimately untrue.”

A search on Google Trends shows a surge in interest for the query "how to hit a woman so no one knows" in late April 2021. This coincides with when the study drew media coverage -- such as here, here and here.

A screenshot of a Google Trends search taken on May 6, 2021

Despite the improperly executed research, coronavirus-induced confinement has led to an increase in violence cases and their severity, and made it more difficult to report abuses or help victims, activists say.

In May 2020, the United Nations warned that violence against women during Covid-19 was a "shadow pandemic."