Skip to main content
Protesters holding a rally near the Philippine International Convention Center in Manila in May 2019, where the Commission on Elections (COMELEC), was tallying votes in the midterm polls. (AFP / Noel Celis)

Multiple Facebook and Twitter posts shared thousands of times in mid-May 2021 claim that Philippine President Rodrigo Duterte fired the only spokesman for the country’s poll body. The claim is misleading: Duterte’s communications office said it had not fired the spokesman, who has continued to represent the poll body in media interviews as of May 31, 2021.

The Tagalog-language text translates to English as: “Finally Comelec official Jimenez [has been] removed from office by [President Rodrigo Duterte] and his other colleagues. For the sake of clean elections in 2022”. 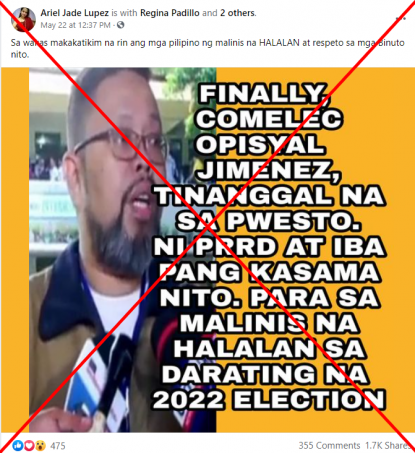 James Jimenez is the spokesman for the Philippine Commission on Elections (Comelec).

The misleading posts circulated online as Comelec ramped up its voter registration campaign one year before the scheduled presidential elections on May 9, 2022.

The commission has been preparing to adjust campaign and voting rules as the country continues to grapple with the Covid-19 pandemic.

Michel Kristian Ablan, an official at Duterte’s communications office, said the president had not fired Jimenez.

“[The purported firing was] not reported by the Philippine News Agency or any of our attached agencies,” Ablan told AFP on May 25, 2021.

Jimenez also appeared in media interviews as Comelec spokesman in the days after the misleading posts circulated online.

In a May 25, 2021 interview with local media News5, he talked about how the voting process in the 2022 elections would remain unchanged despite Covid-19 restrictions.

On May 26, 2021, he answered questions about the upcoming polls in a programme aired by broadcaster GMA News.

Multiple keyword searches online found no official government statements or credible news reports to support the claim in the misleading posts as of May 31, 2021.