A photo of South Korean President Moon Jae-in has been shared multiple times on Facebook alongside a claim it shows he was
“unhappy” after a bilateral summit in 2021 with US President Joe Biden. The claim is misleading: the photo actually shows Moon leaving a hospital after his mother passed away in October 2019. 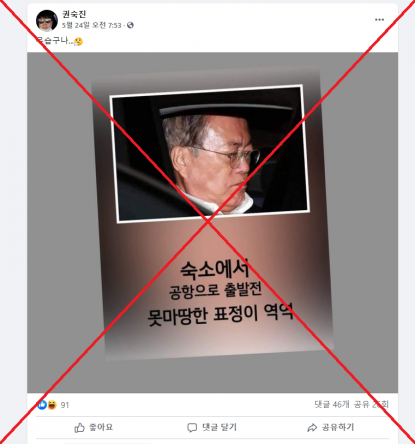 The Korean-language text superimposed on the image reads: “Unhappy expression is apparent [on Moon’s face] before he leaves his place of accommodation to the airport.”

The image circulated online after Moon’s official visit to the United States in mid-May. He joined a bilateral meeting with US President Joe Biden at the White House on May 21, 2021.

Several comments under the misleading post appeared to indicate users were misled by the photo.

“Who can understand [Moon’s] terrible feelings after being outwitted by Biden,” wrote one user, in part.

“[Moon’s] place of accommodation was not even the guest house at the White House,” wrote another.

The photo was shared on Facebook here, here, here and here alongside a similar claim.

The caption says the photo shows Moon leaving a Busan hospital where his mother had died hours earlier. 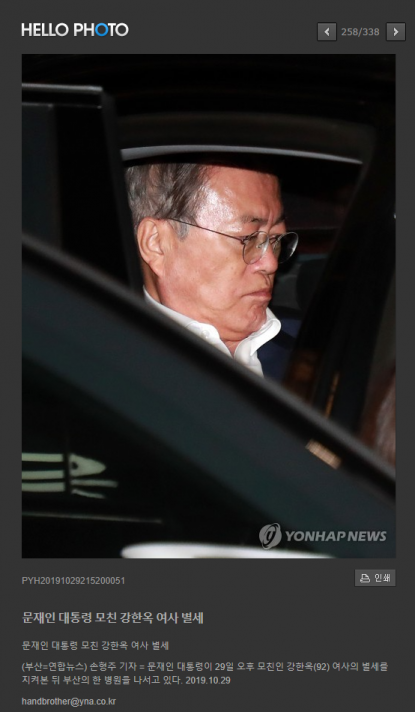 Screenshot of the original photo from Yonhap News Agency. Captured May 27, 2021.

“President Moon Jae-in leaves a hospital in Busan on the 29th after he watched his mother, Kang Han-ok, 92, pass away,” the photo’s Korean-language caption reads.

Below is a screenshot comparison of the photo shared on Facebook (L) and the original Yonhap photo (R): 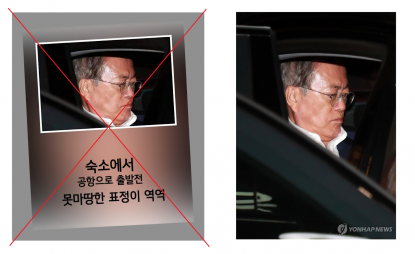 Screenshot comparison of the photo shared on Facebook (L) and original photo from Yonhap (R).

The same photo can also be found here on the photo database of South Korean news outlet News1.

The photo’s caption reads: “President Moon Jae-in heads to the funeral altar of his mother after watching her pass away at a hospital in Busan on the 29th.”

Other Yonhap News photographs that were taken at the same scene from different angles (here and here) also show Moon frowning.

AFP could not locate any photos on the South Korea presidential office website; Yonhap News Agency’s photo database or on South Korean news sites that show Moon’s expression before he left for the airport during his US trip in May 2021.