Skip to main content
A campaigner holds a pack of cigarettes in front of a stand of tobacco boxes revealing how price tags can hide consumer warning notices, at a campaign booth to mark the World No Tobacco Day in Seoul on May 31, 2012. (AFP / Jung Yeon-je)

The post’s Korean-language caption reads: “Is this for real that they will raise the price for a pack of tobacco to 8,000 South Korean won? Insane. Let’s quit smoking, everyone.” 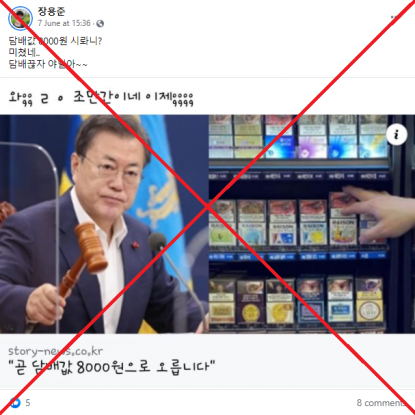 The claim was shared alongside a screenshot of a news report from South Korean news website Story News published on June 2, 2021.

“The government’s plan to raise tobacco prices has caused controversy. The Ministry of Health and Welfare announced a new plan regarding public health, which includes a controversial price hike on tobacco by 2030,” reads the report in part, without elaborating when the ministry’s plan was announced.

An identical claim was shared on Facebook here, here, here and here.

The claim is misleading: the posts cited a now-scrapped government plan.

An official at South Korea's Ministry of Health and Welfare told AFP on June 11, 2021 the country has no plan to increase the price of tobacco.

He said: "We are not considering increasing the price of tobacco".

The scrapped plan can be seen here on the ministry’s website.

Following the U-turn, then-prime minister Chung Sye-kyun said the government did not intend to increase the price of tobacco.

“The government had never considered hiking the tobacco price. It also does not have a plan to do so in the future,” said Chung on January 28, 2021, on his verified Facebook page.