A purported McDonald’s advert mocking Filipino fast food chain Jollibee has been shared repeatedly on Facebook. A digital analysis by AFP, however, found the image has been fabricated. Separately, McDonald’s said it had not created the misleading graphic.

The purported advert was posted here on Facebook on June 4, 2021.

It shows a plate of fried chicken alongside text that reads: “Our competitor threw in the towel”.

A logo for McDonald’s can be seen in the top right-hand side of the image.

Text overlaid on the advert reads in part: “Strike whilst the iron is hot. McDonald’s never fail[s] to amaze me with their [m]arketing.” 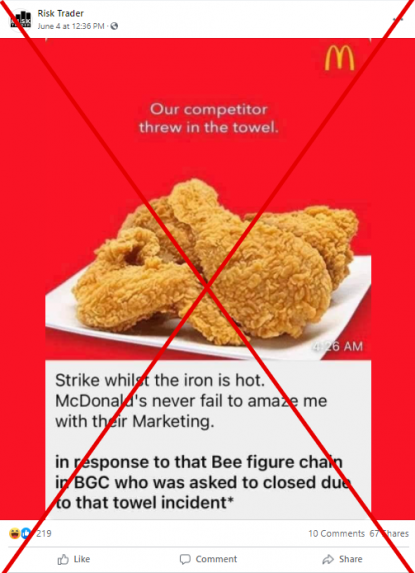 This purported McDonald’s advert circulated online in the Philippines shortly after a customer at Filipino fast food restaurant Jollibee shared this video apparently showing a towel inside her fried chicken.

Jollibee said it would investigate the incident in a statement published here on its Facebook page on June 3, 2021.

The purported advert was shared thousands of times in similar posts here, here, here and here on Facebook.

The graphic, however, has been digitally altered.

A combination of reverse image and keyword searches found the original photo was taken from McDonald’s delivery website.

Below is a screenshot comparison of the altered graphic (L) and the original photo (R): 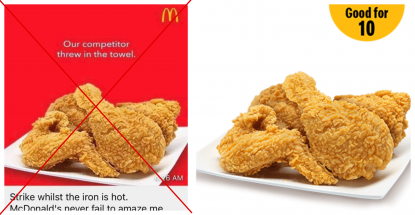 A forensic analysis of the misleading graphic using InVID-WeVerify, a digital verification tool, found the image had been fabricated.

In the false advert, the text and McDonald’s logo stand out in contrast to the rest of the image, which is a “very strong indicator of tampering”, according to the InVID-WeVerify website.

Below is a screenshot comparison of the altered graphic (L) and the image under InVID-WeVerify’s JPEG Ghosts filter (R):

McDonald’s Philippines told AFP on June 14 that it has not created nor published the purported advert.

“McDonald’s Philippines did not and would not produce or release any disparaging material against any brand,” a spokesperson said.