Skip to main content
A voter drops off his early voting ballot for the 2020 presidential election at the Brooklyn Museum in New York City on October 30, 2020 (AFP / Angela Weiss)

Social media posts claim that City Blue Imaging misprinted ballots, linking a Christmas Eve fire there to an alleged effort to cover up fraud in the 2020 election. This is false; the  Rochester, New York company says ballot printing is not a service it offers.

“The plot thickens... while we were trying to enjoy Christmas amid the plandemic and Nashville bombing, a fire completely destroyed City Blue Imaging Services in Rochester, New York. Why is that significant... because they are the print shop responsible for the flawed and misleading ballots in New York. I’m sure it’s just a coincidence,” says a December 28, 2020 Facebook post. 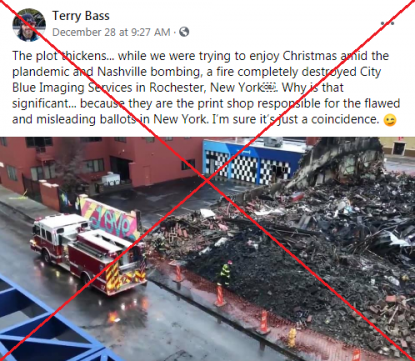 US President Donald Trump has repeatedly made unfounded allegations of fraud in the 2020 presidential election, which he lost to Democrat Joe Biden. AFP Fact Check has debunked a series of inaccurate claims about vote fraud here.

The City Blue Imaging building was destroyed by a fire on December 24, but the company says it does not print ballots.

“NO, we do not do ballot printing. We don’t have the equipment and it’s not a specialty we would be involved with. We are mainly doing blue printing and marketing,” it tweeted on December 27.

And some posts attempt to connect the fire at City Blue Imaging to a false claim that a bombing in Nashville, Tennessee was linked to an AT&T audit of machines from Dominion Voting Systems, an election technologies company that has been repeatedly targeted by Trump and his supporters with false accusations of involvement in vote fraud.

AT&T and Dominion previously told AFP Fact Check that no such audit was taking place.