Two images have been shared repeatedly in multiple Facebook and Twitter posts which claim they show leaders of an Indian communist organisation showing support for China and "insulting" the Indian army. The posts circulated following a deadly border clash between Indian and Chinese troops in June 2020. The claim is false; the placards in the images have been doctored to include pro-China messages; the original photos show the politicians holding placards that call for domestic policy changes. 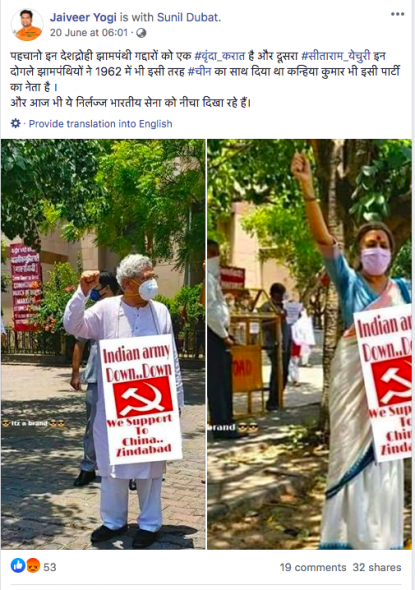 The post’s Hindi-language caption translates to English as: “Recognise these communists traitors, Setaram Yechury and Brinda Karat. These communists also stood by China in 1962 and Kanhaiya Kumar is also a leader of this party. And today, these people are insulting our Indian army.”

The text on the posters reads: “Indian army down..down, We support to long live China” (sic).

The post’s caption also makes reference to the war between India and China in 1962, which is widely known as the Sino-Indian War and erupted in the disputed Himalayan border regions.

The posts circulated days after a deadly clash between Indian and Chinese soldiers in India-administered Ladakh on June 15. At least 20 Indian soldiers were killed in the incident. China has refused to confirm if it suffered any casualties in the first deadly clash at the border in decades, although Indian media said at least 40 Chinese troops were killed or seriously hurt, as reported here by AFP.

The two images were also shared alongside a similar claim on Facebook here and here; on Twitter here and here.

A reverse image search on Google found the images were doctored to digitally insert the anti-India, pro-China placards. The original photos were published on Twitter here by the Communist Party of India (Marxist) (CPI(M)) on June 16, 2020, and show the CPI(M) leaders protesting domestic policies of the ruling government led by Prime Minister Narendra Modi.

Below is a screenshot comparison of the doctored photos in misleading post (L) and original photos published on Twitter (R): 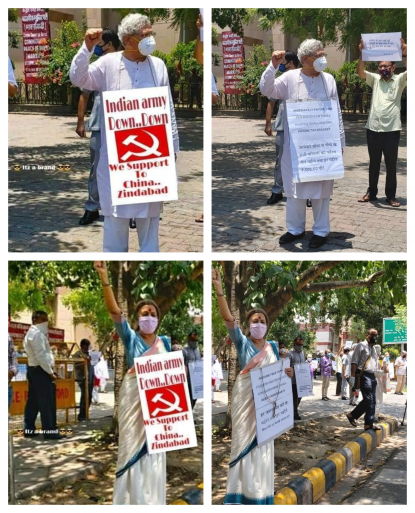 The text on the poster held by Yechury (seen top-right above) reads: “Immediately pay 7,500 Indian rupees a month for the next three months to all outside tax bracket.”

The text on the poster held by Karat (seen bottom-right above) reads: “Provide free 10 kilograms foodgrains per month for six months to all needy individuals.”

CPI(M)’s official response to the fallout from the mid-June border clash was published here on June 19, 2020. It expressed support for the government’s response.