An image of weapons and ammunition has been shared hundreds of times on Facebook in Ethiopia alongside a claim it shows an arsenal recently seized from the Tigray People’s Liberation Front (TPLF) by the Amhara Special Forces, soldiers of a region that shares a border with the northern Tigray region. However, this is false. This photograph shows weapons seized by the African Union Mission to Somalia (AMISOM) in Mogadishu back in 2014.

The claim was posted on Facebook by an account called “Shewa Press” on July 12, 2021, and has been shared nearly 400 times since.

The caption of the post, written in Amharic, reads: “The image that you see shows weapons of the junta seized by the heroic Amhara Special Forces”. 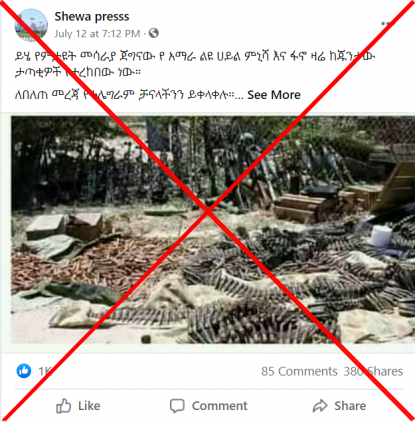 The image shows a large amount of ammunition in the foreground and a row of weapons laid out behind, including mortars as well as assault rifles.

The Facebook post claims that the weapons seen were recently seized from TPLF soldiers (“the junta”) by Amhara regional forces. The post does not specify where these weapons were captured but redirects Facebook users to a Telegram channel for “more information regarding this news”.

However, the claim is false: this is an old photograph taken in Somalia.

AFP Fact Check ran a reverse image search and found that the image was posted on Alamy, a British stock photo website, on August 15, 2014. 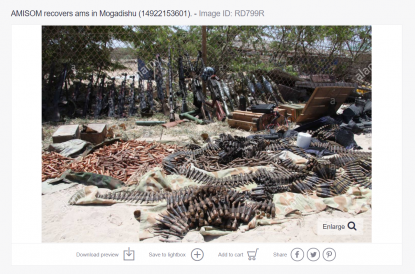 AFP Fact Check ran a search on the AMISOM website and traced the original image to a press release published on August 16, 2014, detailing the operations that led to the disarmament and arrest of militia fighters.

“In yesterday’s early morning cordon and search operation in Mogadishu’s Wadajir district, Somali Government forces with the support of African Union troops recovered 15 guns, assortment of ammunition and 20 of militia were arrested when they were overpowered by the forces,” the press release reads. 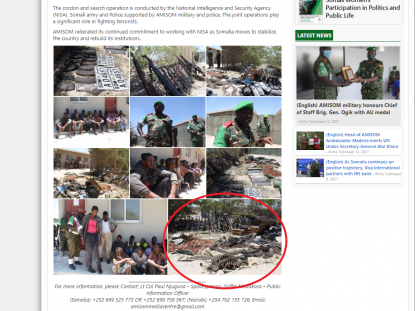 On August 15, 2014, AFP reported on heavy fighting that occurred in Mogadishu as the Somali government and African Union troops attempted to disarm a powerful militia warlord.

In November 2020, the Federal Government of Ethiopia launched a military operation in the northern region of Tigray in response to attacks by the TPLF on military camps. 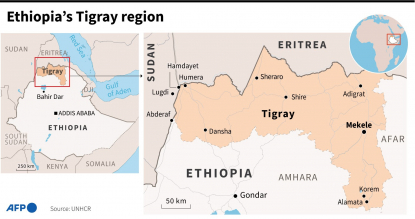 After a premature declaration of victory in November, government forces were stalled in a months-long battle with pro-TPLF fighters and the Tigray Defence Forces (TDF). The Ethiopian army was backed by troops from the neighbouring Amhara region and the army of Eritrea, which borders Tigray.

Tigrayan forces recently claimed a series of battlefield gains in a renewed assault that comes two weeks after the federal government declared a unilateral ceasefire in the face of multiple defeats.

The regional capital Mekele was recaptured in late June, which marked a turning point in the brutal conflict that left thousands of dead and millions displaced.