A photo of Australian Prime Minister Scott Morrison purports to show him standing alone during the 2019 G7 Leaders’ Summit in France. The image has been photoshopped; it originated as a satirical post but has been shared out of context.

The image, for example here on Facebook on August 26, 2019, purports to show Morrison standing alone and at a considerable distance away from a other world leaders at the G7 meeting in the French city of Biarritz.

The misleading post's caption says: "When a picture paints a thousand words. The Hillsong & Big Coal bought FREAK, who hates the needy & humanity in general. How low have we sunk, Australia?"

But the image has been edited -- and it was originally posted as satire.

The image was created by Australian satirical group The Chaser, which published it on their Twitter account here on August 26.

The group confirmed in an August 27 email to AFP that they had photoshopped the image.

The image appears to have been taken from video, for example here, when Morisson and other world leaders stood together for a “family photo” at the G7 summit on August 25.

Below is a screenshot of the video at the moment when Morrison is briefly seen on his own: 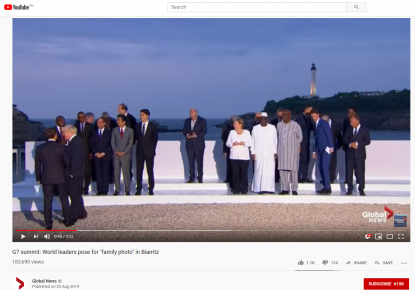