Three photos of Indian actress Rakhi Sawant posing with a Pakistani flag have been shared thousands of times in multiple Facebook and Twitter posts that call for her to be “hanged or exiled” from India. The photographs have been shared without context: the images show the actress on a film set in May 2019 when she was playing a Pakistani character; they were posted by the actress on her Instagram page.

The photos were shared on Facebook here on September 20, 2020. 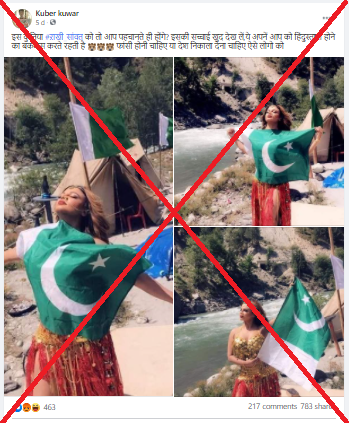 The post’s Hindi-language caption translates to English as: “You definitely recognise this bitch Rakhi Sawant. See what she’s really like for yourself. She talks nonsense about being Indian. People like her should be hanged or exiled out of the country."

Rakhi Sawant is an Indian movie and television actress. She has attracted media attention previously for stunts including wearing a mini dress with Indian Prime Minister Narindra Modi’s face.

A reverse image search on Google found the photos were originally posted here by the actress on her verified Instagram page on May 8, 2019.

“I love my india, but it's my character in the film dhara 370,” reads the English-language caption of the post.

The actress can be seen in the same costume and talking about her role in the movie in this 55-second long Instagram video she posted on the same day.

“Hi friends, I am almost in Pakistan and the film’s name is Dhara 370. The film is about the Kashmiri pandits and Kashmir and I am playing the role of a Pakistani girl. I expose how the Pakistani kids are lured and convinced for jihad in Kashmir in my role as a Pakistani girl. You can see my costume as I am performing a dance number today,” she can be heard saying in Hindi.

A longer version of the video was published here on YouTube on May 9, 2020. The actress can be heard saying that they are in the north Indian mountainous town of Kullu-Manali at the video's 4:26 mark.

The shooting of the movie was reported here and here in Indian media in May 2020.