Dozens of girls were not found in a Delaware shipping container

Social media posts claim that 62 girls were rescued from a shipping container in the US state of Delaware. This is false; Customs and Border Patrol said it investigated the claim and found no evidence to support it, and the Delaware Department of Justice said it was not familiar with such an event. 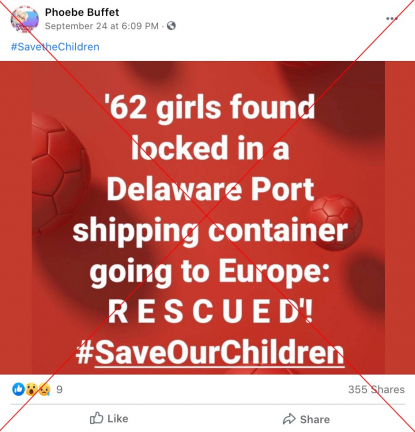 “Customs and Border Protection thoroughly investigated the claim and found zero evidence to substantiate this false rumor of a human smuggling event through the Port of Wilmington, Del.,” spokesman Steve Bansbach told AFP in an email.

And Delaware Department of Justice’s Mat Marshall said via email that the claim “doesn’t ring a bell.”

Some posts spread the claim using the hashtag #SaveOurChildren. Supporters of the QAnon conspiracy theory -- which alleges that powerful Democrats and Hollywood figures engage in child sex trafficking and abuse -- have hijacked both it and the #SaveTheChildren hashtags to stoke fears on social media about sexual predators.

Others mention “Pizzagate” -- a 2016 conspiracy theory driven by Donald Trump supporters who alleged that his rival Hillary Clinton and other Democrats were part of a child kidnapping ring operating from the basement of a Washington pizzeria.