This photograph actually shows a Pokemon GO event in Taiwan

A photo has been shared more than one thousand times on Facebook alongside a claim that it shows a pro-government event at a park in Thailand's capital Bangkok. The photo was shared as satire; it actually shows people gathering for a Pokemon GO event in Taiwan in October 2019.

The photo was published in this Facebook post on January 12, 2020. It was shared by a Facebook page which has a Thai-language description that translates to English as "Comedian · Personal Blog".  The post has been shared more than 1,000 times.

The post's Thai-language caption translates to English as: “My disciples took a drone shot of Lumpini Park in the morning, tens of thousands of people came, everybody loves Prime Minister Prayut because he manages well, making the economy and transportation good as well as improving the population level.

“Until the jealous social-media prime minister organised the Run Against Dictatorship rally because he's afraid Prayut will complete his 4-year-term.

The term “uncle” is a local reference to Thailand’s Prime Minister, Prayut Chan-O-cha, as noted in this Bangkok Post report. Lumpini Park is a public park in Bangkok.

The text superimposed on the photo translates to English as: “Crowds of over ten thousand walked to cheer uncle at Lumpini park”. 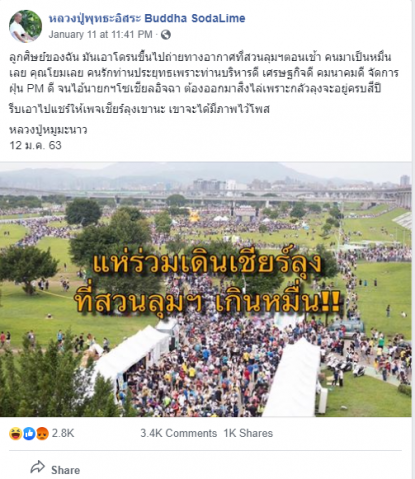 On Sunday, two rival political rallies did take place in Bangkok; the anti-government “Run Against Dictatorship” event, which garnered roughly 10,000 participants, and the “Walk to Support Uncle,” a smaller pro-Prayut gathering that was held in another park. AFP reported on both events here.

The photo in the post was actually taken in October 2019 at an event in Taipei, Taiwan organised for players of Pokemon GO, the augmented reality mobile game based on the video game franchise.

The Thai-language headline translates to English as: "New Taipei City opens a special event to catch Pokemon on the last day. The crowd flocked to over a hundred thousand people.” 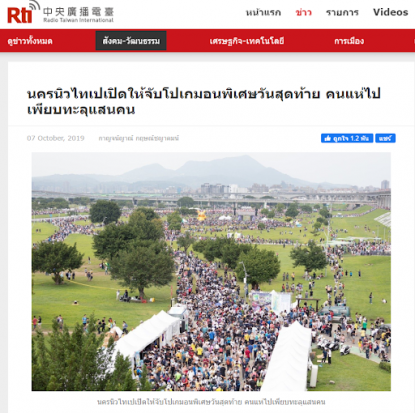 The article’s first paragraph, translated to English, notes that “The New Taipei City Tourism Division, in partnership with Niantic, the manufacturer of Pokémon Go, organised the Pokémon GO Safari Zone” at the New Taipei Metropolitan Park, an 800 hectre green space in the Greater Taipei area.

Below is a screenshot comparison of the photo in the satirical post (L) and the photo in Radio Taiwan’s article (R): 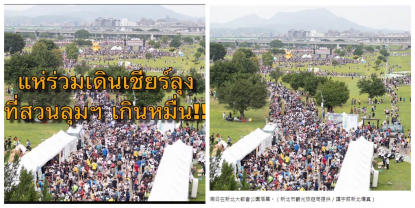 The photo corresponds with a Google user's photo tagged at the park's location on Google Street View here. The image has been embedded below.

Pokemon GO also publicised the three-day event their website here on August 20, 2019. The page provides details on the event’s location, schedules and activities.

The announcement reads in part: “In conjunction with the New Taipei City government, we’ll be live in New Taipei Metropolitan Park from October 3 to 6.”

Below is a screenshot of the Pokemon GO Live website: 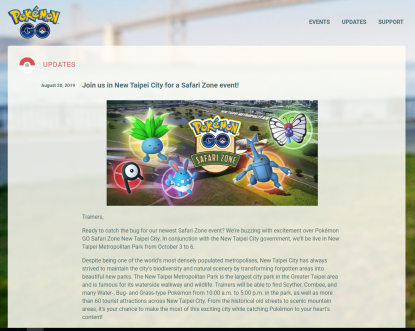