Photo of weapons seized in Ethiopia was taken before Tigray crisis

As the conflict between Ethiopia’s government and dissident Tigray forces escalates, a photograph circulating on social networks purports to show weapons handed over by soldiers of the Tigray People's Liberation Front (TPLF). The claim is false; the weapons were intercepted at the Sudanese border back in 2018.

The image was posted on Facebook on November 9, 2020, five days after Ethiopian Prime Minister Abiy Ahmed ordered troops, tanks and warplanes into the northern Tigray region in response to what he said were attacks on federal military camps orchestrated by the TPLF.

Written in Amharic, the post's caption translates into English as: “Guns soldiers were armed with!! Following the capture of the town of Dansha by our heroes, the traitors are handing in their handguns after coming out of their hideouts”. 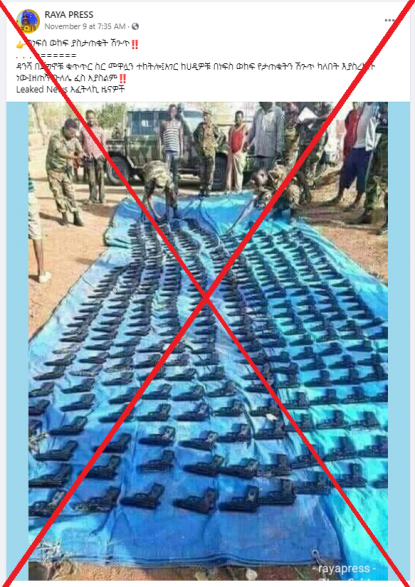 The image shows hundreds of handguns lined up on a blue tarp on the floor. Men in military uniforms can be seen arranging the pistols while another takes a picture of the scene. Other men dressed in civilian clothes look on.

AFP journalists reported from the town of Dansha on November 10, 2020, soon after the Ethiopian army took control of the western Tigrayan town. Since then, the army said its forces have reached within 60 kilometers (37 miles) of Tigray’s capital Mekele.

However, this photo is unrelated to the ongoing conflict in Ethiopia and in fact shows weapons confiscated at the Sudanese border by Ethiopian security back in 2018.

Not weapons from TPLF soldiers

A reverse image search shows that the original photo was used in local media reporting the event. According to Ethiopian site Ezega, Ethiopian security intercepted weapons smuggled through the Tigray region via Sudan.

“The real origin of the shipment and the intended recipients are still unknown. Ethiopia has in the past accused Eritrea for incursions and support for domestic opposition in Amhara and Oromia regions”, it reads.

The story was picked up by Africa News as well as Addis Standard, one of Ethiopia’s leading news outlets.

#Ethiopia - Police intercept over 350 illegal pistols being smuggled into Ethiopia https://t.co/YT4FGQ8kNx Capitan Eshete Awoke, head of Tsegedie woreda security office said the pistols were intercepted as a result of the joint efforts of security forces and defense army. pic.twitter.com/MGyRs70M7e

Ethiopia has seen massive weapons seizures since Abiy Ahmed came to power in 2018, following his pursuit of wide-ranging political and economic reforms.

Officials have highlighted efforts to crack down on the illicit flow of weapons in a country struggling with ethnic tensions.

Police in Addis Ababa announced in May 2020 that some 10,000 guns, including around 30 Kalashnikov assault rifles, had been seized in the capital over the previous nine months, described in this AFP report.

Since then, Ethiopia passed a new law prohibiting the sale, possession, storage and transporting of firearms without a valid licence.

Relations between TPLF in Ethiopia’s north and the national government have been deteriorating since Prime Minister Abiy Ahmed came to power in 2018, with regional opposition leaders accusing his administration of discrimination.

More than 40,000 refugees have fled the recent violence into eastern Sudan, and rockets have fallen on the Eritrean capital Asmara and Ethiopian cities outside Tigray, spurring fears the conflict could widen.

The federal army says its forces have nearly reached Mekele, the northern region’s capital and seat of the TPLF, and Abiy gave Tigrayan regional forces and their leaders 72 hours to “take advantage of this last opportunity surrender”.

"Your journey of destruction is coming to end,” Abiy wrote in a tweet on November 22, 2020.