A photo of two kangaroos jumping with their arms raised towards the sky has been shared thousands of times in multiple Facebook and Twitter posts published in January 2020. The posts were shared alongside a claim that the kangaroos were rejoicing after rain fell during bushfires in Australia. The photo has been shared in a misleading context; the image was actually taken in 2014 by a nature photographer in Australia who told AFP it was unrelated to the recent bushfires.

At least 25 people have been killed and more than 1,800 homes destroyed after deadly bushfires scorched millions of hectares of land in Australia, as reported here by AFP on January 7, 2020. 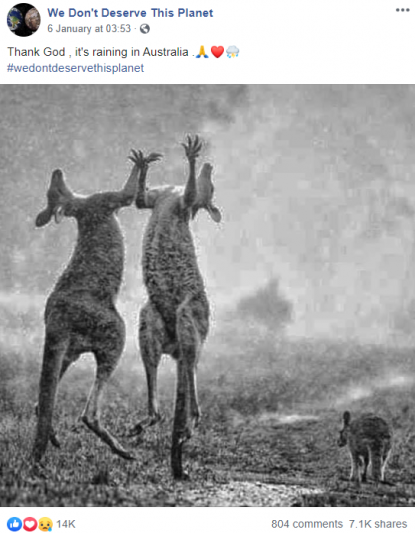 The photo has been circulated in a misleading context; it was taken in 2014 by a nature photographer in Australia.

A reverse image search on Google found the same photo published here on the website of photographer Charles Davis, who is based in New South Wales, Australia.

The photograph is captioned: “Praise to the Rain”.

Below is a screenshot comparison of the photo in the misleading posts (L) and the one published on Davis’ website (R):

Davis told AFP in an email dated January 8: “That photo was taken almost 7 years ago. It is my photo, It has nothing to do with the fires and it is not raining very much at all here.

“The kangaroos in that photo are likely all ash now as the fires have gone through that area. I don’t know who started using that photo but it has been used completely out of context.”

"I took this photo in 2014. These kangaroos are more than likely ash now and definitely aren’t celebrating anything."

It really annoys me that I even have to post this while everything around my home is still burning. This photo, my photo has been used to post lies all over social media for the last two weeks. People are posting it saying (someone captured these kangaroos celebrating the rains that are putting out the fires in Australia). Firstly I took this photo in 2014. These kangaroos are more than likely ash now and definitely aren’t celebrating anything. I can say first hand there has been bugger all rain and everything is still very much burning. If you see you anyone posting this photo with bullshit lies like this please set them straight. It’s bad enough to have your work stolen but to have it used to promote lies for others social media ego stroking is not cool.

Rain did fall in parts of the bushfire-stricken states of New South Wales and Victoria around January 6 when the misleading posts were shared, but experts said it was not enough to extinguish the fires, ABC Australia reported here on January 7.

Indian news site LatestLY also debunked the misleading claim about the kangaroo image in this report published on January 6, 2020.