A photo has been shared thousands of times on Facebook, alongside a claim that a rat “larger than a cat” was caught in Malaysia. The claim is false; the photo was taken at an angle that made the rodent appear much larger.

The photo, which shows a man smiling while holding the enormous creature with a pair of tongs, was published here on August 16, 2019, and has been shared over 5,400 times.

Translated to English, the caption says:
“Scary!
Pest control company
Staff shared it with me
Rat larger than a cat
It’s in Malaysia~Johor Bahru.” 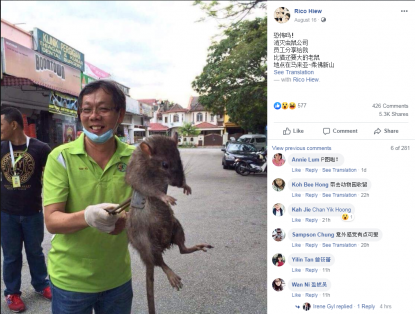 A reverse image search reveals that this picture has been circulating on social media for years.

The original photo was published on May 23, 2015, on Facebook here by a local residents’ committee, along with another photo from a different angle that gives a better idea of the rat’s size.

The post also says that the photos were not taken in Johor Bahru but nearly 400 kilometres (250 miles) away at USJ11, an area within the Subang Jaya municipality, west of Kuala Lumpur.

The first photo was circulated widely on social media soon after it was first published, prompting its original publishers to issue a side-by-side comparison on May 25, 2015, to refute claims that a giant rodent had been caught in the neighbourhood.

Hannah Yeoh, the former state representative for the constituency, also took to social media on May 25, 2015, to explain that the perspective of the photo made the rat appear larger.

Rat pic caught in USJ11 is circulating. It was the angle when rat was photographed making it look gigantic pic.twitter.com/PVhG0yYOCu

The Star, a Malaysian newspaper, also reported on the photo on June 1, 2015.

Their article was accompanied by the below video: